Chart of the Week: How GungHo stole the Japanese mobile game industry from DeNA and GREE

Times they are a'changing 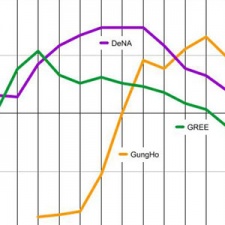 One outcome of reading the quarterly financial reports from game companies - you can see all the news here - is that you get a good overview of how the markets in different countries are developing.

As you might expect, most Chinese-focused publishers are growing, as are Korean outfits Com2uS and Gamevil; both strongly up on a combination of local and international expansion.

When it comes to Japan, however, the situation is more complex.

The two big platforms - GREE and DeNA - continue to shrink with sales down 14 and 17 percent quarter-on-quarter respectively.

The reason is historically both companies have relied on strong mobile browser game business; something that's been steadily eaten away by the growth of native smartphone gaming.

Late to this party, both companies are now dealing with relative newcomers into the mobile market, notable Puzzle & Dragons  publisher/developer GungHo Online, which over the past 18 months has exploded within the Japanese market.

The manner in which it's eaten GREE and DeNA's business can be clearly seen in the following graph.

Indeed, such has been GungHo's dominance in the Japanese smartphone gaming market, it estimated it accounted for 51 percent of all sales during 2013.

This will drop during 2014. In fact, GungHo's own financials suggest Puzzle & Dragons has stopped growing in terms of new players.

Still, it's in a much better position than DeNA and GREE, which are still trying to retool for the smartphone game era, plus dealing with the relative failure of their attempts to expand internationally.

For example, GREE has just announced it's retraining 700 developers who used to make mobile browser games to make smartphone games.