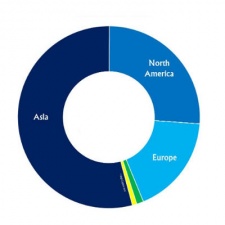 As smartphones cement their iron grip on the world market, a new report predicts that mobile games are set to prosper – especially in Asia.

Research from intelligence firm Digi-Capital has claimed that the global mobile games industry will rake in $45 billion of revenue in 2018, and Asia will be responsible for 50 percent of that figure.

“Where mobile games will take $3 of every $10 spent by gamers on software in 2015, that figure will go up to $4 out of every $10 by 2018,” Digi-Capital founder and managing director Tim Merel wrote in the report.

Meanwhile, Merel also said that “stable, top-grossing mobile games” will continue to rake in the most cash. In other words, Clash of Clans, Candy Crush Saga and Game of War can be expected to sit tight on their chart-topping spots.

Indeed, King and Supercell have clung to the heights of the grossing lists on both iOS and Android since 2012. While Digi-Capital doesn’t see that changing, it warns this could spell bad news for other industry players.

“This is great for games leaders and their shareholders,” Merel wrote. “But it puts the big squeeze on midtier players and makes breaking through more challenging for indies.”

It echoes an address by Merel at this year’s GDC, where he advised mid-tier companies to slim down to indie size or face an uncertain future hampered by higher production costs, low cashflow, and smaller userbases.