Nintendo can steer its ship back on course without moving on mobile, and here's how 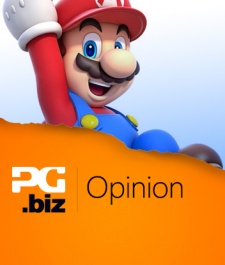 Although it would be easy to plot a similar decline for the other two console manufacturers across the course of the last four years, Nintendo's competitors have enjoyed notable positive spells that have passed the Japanese giant by in recent months - the successful launches on PS4 and Xbox One two massive lights at the end of the tunnel.

In contrast, Nintendo appears to be falling down on two fronts: Wii U continues to stutter and stall and, after a strong spell, arguably the 3DS is too.

Such dark clouds are starting to cast a shadow over all areas over a business that, previously, geeks and suits alike have always held in high regard. Case in point, straight off the back of announcing a $229 million operating loss, the company quickly found itself embroiled in a PR disaster surrounding Tomodachi Life.

What's more, Nintendo's output is now regularly savaged by market commentators, with Amir Anvarzadeh - Japanese equity manager at BGC Partners - stating recently to Bloomberg that "the Wii U is dead [...] and 3DS games are getting totally cannibalized by casual games on the smart devices."

Poor sales were a leading factor in the company's losses, and while Iwata blamed a weakened yen, it is clear that Abenomics is not the root cause of the company's woes.

So how does it plan to achieve the ¥40 billion profits planned for this financial year? According to the company's Financial Results Briefing, by pinning hopes on digitally-enabled figures and a focus on portability and distribution.

Mario Kart 8 is set to use the same type of NFC-enhanced figures as Skylanders, on a platform referred to as the 'Nintendo Figure Platform', or, NFP.

The company has already seen a degree of success with this type of product in the Pokémon Rumble U figures: the newly announced NFP figures, however, are due to see greater integration across multiple games, and with data-uplink to both the Wii U and 3DS .

From a marketing standpoint, it's a great move with huge scope for monetisation. The figures are perfectly positioned to recapture the pre-teen market: the engine of growth that originally powered the company's rise.

It is easy to see how Nintendo will integrate into the intended market and ensure the planned ecosystem 'sticks'. Such a dynamic helped amassed $2 billion for Skylanders and Activision-Blizzard, and Nintendo hopes to use it to similar effect.

Mario Kart TV leverages smartphones as a shop-window for the console game.

There is no word yet on a price-point, but Pokémon Rumble U figures sold for around $4 each. The challenge is ensuring that, unlike their predecessors, the NFP figures are integral to the play system.

This leads us to the second point: portables.

In a year when the Japan will see smartphones account for 62 percent of its mobile phone market, and when domestic app revenue continues to beat that of the US, does 'portable' include 'mobile'?

Aside from a placeholder statement, promising "to release the first version of an application that specifically shows how Nintendo can utilise smart devices within this year," Iwata announced the provisionally titled Mario Kart TV.

It leverages smartphones as a shop-window for the console game, with the ability to upload game footage from the Wii U and watch it on smartphones and PCs.

"[It] enables users to watch videos in a screen layout suitable for systems such as smart devices and computers, around the same time as the release of Mario Kart 8" he says.

So, in short, there will be no core-IP on smart devices yet, and previous assertions that Nintendo will continue to shun mobile as long as Iwata is at the helm are looking increasingly credible.

Handheld strategy will therefore rest on the 3DS family. Although Wednesday's figures showed a slump in 3DS unit sales, the system is now key to Nintendo's gameplan.

According to the briefing, "[t]he installed base of Nintendo 3DS has already surpassed 43 million units, which is large enough to develop this platform business. By leveraging upon its large installed base, we are aiming to make this fiscal year a significant harvest year."

Further, it clarifies the company's intention of "working with domestic software publishers on selling their Nintendo 3DS titles overseas," and capitalising on "the further expansion of our digital business" with an increasing number of overseas indie developers.

It's possible to feel more than a portion of sympathy for Iwata.

The company's figures show an increase in 3DS software sales in all regions, so this much is supported. A strengthened digital-distribution system will feed into this, and if the company works hard to integrate and further monetise the NFP system there could be a dramatic uptick in revenue.

However, there is no doubt that a two-pronged strategy to prop-up a flagging core product in the Wii U is very dangerous, and it remains to be seen if the company can resist the erosion of market share that Anvarzadeh highlights.

Nevertheless, one it's possible to feel more than a portion of sympathy for Iwata in a recent interview when he suggested, "We have had a console business for 30 years, and I don’t think we can just transfer that over onto a smartphone model."

Nintendo's continued reluctance to embrace mobile undoubtedly piles a lot of pressure on NFP and the 3DS to deliver, and by once again ignoring mobile the company is going to see its resilience sorely tested. Unless it once again secure a meaningful relationship with its consumers, it risks being severely, perhaps fatally, punished.