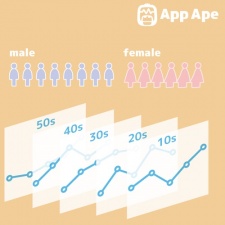 For this report, App Ape collected data from around 50,000 Android-based mobile phones.

Next, let's see which categories of games are gaining popularity. The following table shows the MAU percentage per category by age and gender.

In February, Pokemon GO was the big hit in the domestic mobile market, which made a lot of changes to the age bracket and gender distribution.

First of all, in the case of male users, the Arcade category that typically proves the most popular. However, the Adventure category increased to 18% in February because of Pokemon GO.

In the case of male users in their 30s and 40s, the Role-Playing category, which includes Lineage 2 Revolution, and the Puzzle category, which features Anipang 3 For Kakao and Friends Popcorn For Kakao, still prove strong. But even in this demographic, the Adventure category increased in popularity.

In the case of male users in their 50s, who usually choose the Casino category as their favourite, for February this has changed to the Adventure category.

In summary, we can see that Pokemon GO has had a big impact on all age groups for men.

Unlike male users, who have been affected by the Pokemon GO craze in particular, there were no big changes across age groups for women.

So let’s find out what kind of games have a big impact on the distribution of categories.

The mobile game that took place first within each male age group was Pokemon GO. Monthly average users for the game totalled around 2.88 million, with roughly 3.3 million installs overall.

Interestingly, one game that continues to steadily rise in popularity amongst male teenage gamers is Supercell's Clash Royale.

Even though Clash Royale was released a year ago, the game is still very popular among male teenage gamers, with MAUs continuing to rise.

Let’s take a look at the Top five mobile games among female gamers based on MAUs.

Pokemon GO ranked first for each female age group except the over-50s, where the title was ranked 10th. Puzzle games dominated overall in the rankings, while Lineage 2 Revolution, which was positioned in fourth last month for MAUs, ranked third in February amongst women.

In general, the behaviour of the domestic mobile game users has been significantly affected by Pokemon GO, with DAUs in decline but MAUs on the rise.

In the case of female teenage gamers, they played relatively diverse games, and most of them from the 20s to 50s age groups continued to prefer playing puzzles.