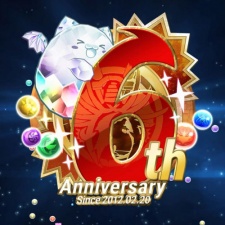 It’s a technological quirk but the Japanese mobile market has one of lowest levels of smartphone penetration of any developed nation.

Estimates range from as low as 50 per cent up to around 60 per cent, whereas in western Europe and the US, well over 70 per cent of the population have a smartphone.

(The reason is Japanese feature phones are relatively advanced and the large number of retired Japanese prefer to stick with them.)

Given this context, the success of Gungho Online’s match-three monster RPG Puzzle & Dragons, which is about to celebrate its sixth birthday, is even more stark. It's been downloaded over 47 million times in Japan, which means up to 75 per cent of Japanese smartphone owners have played it.

As well as being the first mobile game in the world to do $1 billion of revenue, it’s since gone on to generate over ¥600 billion (around $6 billion give-or-take the vagaries of exchange rates) in revenue in the years since it was released.

Around 90 per cent of this total has come from Japan, with Asia and North America the game’s other territories, albeit with around seven and three per cent of lifetime sales respectively,

What’s more interesting to consider, though, is how the game’s financials have changed over over the years and how little Gungho itself has changed.

Famously developed by a team of four using Unity, Puzzle & Dragons was released for iOS in Japan on February 20th 2012 and quickly proved successful. The Android version followed on September 18th and it was at this stage Gungho started aggressively advertising the game on Japanese TV.

The result was an explosion in downloads and Gungho’s sales, which grew 210, 129 and 41 per cent respectively over the next three financial quarters, rising to a total of ¥163 billion (around $1.7 billion) in 2013.

The company’s sales peaked in 2014 at ¥173 billion, of which Gungho reported 92 percent (around $1.5 billion) came from its Puzzle & Dragons business.

By this stage this had expanded beyond the original mobile game to include various related mobile apps, a 3DS game (Puzzle & Dragons Z) and the usual array of merchandising and ancillary revenues.

In the three years since those peak revenues, Puzzle & Dragons’ sales have declined.

They were down 14 per cent in 2015, when they accounted for 89 per cent of Gungho’s total annual sales.

They dropped a further 27 per cent in 2016 (84 per cent of Gungho's sales), which is when the company stopped breaking out the percentage of its sales generated by Puzzle & Dragons. In 2017, Gungho’s sales were down 18 per cent

Yet, what’s significant about this trend isn’t the decline.

With Puzzle & Dragons’ sales dominated by the relatively small Japanese market, which has reached saturation, this trajectory of explosive growth followed by a slow and steady decline was always to be expected.

And although its profit margin is falling faster than sales, Gungho remains an incredibly profitable games company.

Down from an insane peak of 55 percent in 2013, Gungho’s operational profit margin in 2017 was 37 per cent, which compares with 22 per cent for Activision Blizzard and 25 per cent for EA.

Even arch-rival Mixi, which publishes the current number one top grossing mobile game Monster Strike in Japan, has only managed a gross profit margin of just over 30 per cent for a couple of peak quarters.

It’s this continuing high level of profitability that highlights the biggest surprise arising from Puzzle & Dragons, which is how little impact the riches generated by the game have had on Gungho’s business.

Not for Gungho the recent decision of South Korean developer Bluehole Inc to spin out its most successful game (Playerunknown’s Battlegrounds) into a branded standalone company (PUBG Corp.) to consolidate value.

Instead, Gungho has continued to operate pretty much as it always has, piecemeal and - from the outside - somewhat haphazardly, releasing games across mobile and console platforms with few apparent synergies.

In that context, the key question is, given how much profit Puzzle & Dragons has generated for the company over the past six years, what’s Gungho done with it all?

Some has been paid out to shareholders in the form of dividends, while a big chunk was spent buying back shares from investor Softbank in two tranches in 2015 and 2016.

Acquisitions included Grasshopper (2013) and mobile gaming network PlayPhone (2014) and there were also investments such as gameplay sharing app Kamcord (since acquired by Lyft), and ongoing publishing deals including Gameloft’s Disney Magic Kingdoms in Japan, Turbo’s Super Senso and the forthcoming game from Signal Studios.

None of these could be called particularly successful, however, and at present, Gungho only holds around $500 million in cash and equivalents.

And perhaps this highlights the biggest strength and weakness of the incredibly lucrative Japanese mobile games market.

Having a top grossing game in Japan means a company will generate a lot of money but find it almost impossible to expand its game, and by default its business, outside the domestic market.

And this leaves it hostage to the arc of a long and highly profitable - but ultimately unavoidable - decline.