From Hoolai to Magic Universe 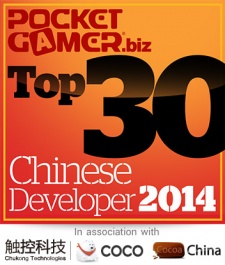 It's a combination that makes it equally fascinating and complex to analyse; a situation we've been dealing with in this, the second year of PocketGamer.biz's listing of what we consider the best Chinese mobile game developers.

So, after lengthy consultation with industry experts, here is 2014's ranking - from 20 to 11 - which is based on sales performance, critical acclaim of releases, innovation in terms of business approach, and the number and range of titles released.

Bursting on the China mobile games in 2011 with its iOS top grossing Hoolai Three Kingdoms game, the 600-strong Hoolai Games operates across the web, social and mobile markets. It has a particular focus on city-building strategy games, with other titles including the WWII-themed Checkmate and the western-oriented Rise of Olympia.

It's big new project is the mobile version successful MMOG Wartune, which it co-developed and for which it has the Asian rights. The game is already a top 20 top grossing hit in China, and Hoolai is working with Kabam, which will publish the western version in 2014.

An Android specialist, Camel Games' big hit came when it ditched simple action games for its F2P city and army-building game Little Empire. Released in mid 2012 - making it a contemporary of Clash of Clans, rather than being a clone as many Chinese developers have since released - it's found a strong audience, being downloaded 10 million times.

Regularly updated, Little Empire has been consistently in the Chinese top grossing top 100 on iPhone since its launch. And it's been an international success too, gaining an audience in southeast Asia and Korea, and more recently in parts of Europe.

Best known as an MMOG company, ZQGame (SHE: 300052) is one of the many such Chinese outfits that is expanding fast into the mobile sector. As part of this shift, in August 2013 it acquired 51 percent of Chinese developer MoreFun in a $60 million deal, and 51 percent of Small Technology in a $15 million deal.

MoreFun, which has annualised sales of around $13 million, is best known for its Kings 2 Online mobile RPG. ZQGame has also recently launched its western-oriented card-battler Pocket Knights, which is generating over $1 million a month in China.

PinIdea's rise has come with its release of mobile version of a highly popular web game. With over 30 million active players, Road to Immortal simplifies the gameplay of a fully-featured Chinese MMORPG, combining it a beautiful painted-style of graphics. The result is the iOS/Android release has been one of the top grossing mobile games in China through 2012 and 2013.

It isn't the only game from PinIdea, though, which has released its Warcraft-inspired Triple Defense: Goblin's Revenge, and worked with developer Xindong to create a mobile version of its God: Three Strategies game.

Demonstrating the confusion that can be created in China, Muhe Network goes by the label iFree Studio in English, despite the presence of the unrelated Russian outfit i-Free in the Chinese market. Nevertheless, the 300-strong Hong Kong-based developer is building on the foundations created back in 2011 by its MMORPGs such as Emross War with more sophisticated games like Lies of Astaroth.

Corporately it received a boost in 2013, with the deal that saw Phoenix Publishing pay $50 million for a 64 percent stake. Meanwhile its Elemental Kingdoms game has been released internationally by Perfect World.

With a strong background in social network games like aquarium sim Happy Fish, Happy Elements focus on mobile games came with a $30 million investment round in mid-2011. Since then it's been busy both within the Chinese market and internationally.

As well as working with partners in Japan, it has an operation in Korea, releasing games such as card-battler Majoca Majoluna (aka Luna Witches) onto Kakao during 2013. It's also worked with US publisher Kabam over title Legend Four, and currently has its sequel - called Dragon Rising - in beta ready for an early 2014 launch.

Hong Kong-based Mad Head games is one of the new generation of upwardly mobile Chinese developers. It's released over a dozen games, but early casual action titles and entertainment apps such as Meowlody and Speedy Rhythm Dinner have now been replaced with more complex games.

Its key title is Tower of Saviors, a hybrid match-3 card-battling RPG, which has performed strongly in southeast Asia, gaining over eight million downloads. And now Mad Head has signed a publishing deal with US powerhouse Storm8 to bring the newly culturalised game - renamed War of Dragons - to western markets.

Part of the Kunlun web game company, Koram Game has always been the most international-focused part of the business. It's also leading the charge when it comes to mobile games, bringing Kunlun's popular browser MMORPGs to mobile devices. One of its early success was Kunlun's Chronicles of Merlin, while Kunlun has licensed NetDragon's Crazy Hordes for mobile.

Koram Game's most recent success, however, has been martial arts card-action title Q Chuan (developed by Firevale), which was the #1 top grossing iPhone game in China in September 2013 as well as going top 10 top grossing in Korea.

Established 12 years ago, 2013 has been a strong year for Yinhan. Its game Space Hunter generated around $7 million in revenue within six months, while its latest release - Ghost, a reworking of the classic Journey to the West theme - has even more successful, being a top 20 top grossing game on iOS, in part thanks to its celebrity endorsement by singer/actress Angelababy.

On the commercial side, Yinhan found success with investment from Chinese film-making outfit Huayi Brothers. It paid $110 million for a majority 51 percent stake in Yinhan, and also has a 13 percent stake in Ourpalm.

It's been a big year for Beijing developer Magic Universe. Established in 2009, it's built its reputation with two games; Latent Dragon Online and Forget Sin. Both released in 2012, Latent Dragon Online generated around $3 million in the first half of 2013, while action RPG Forget Sin - which has remained in the Chinese iPhone top grossing top 100 since launch - is now making $5 million a month.

The result is floated publishing company Tangel (SHE:300148) acquired Magic Universe for around $200 million including $60 million in cash in August. Not bad considering its 2012 turnover was just $11 million.

You can read the rest of the list as it's revealed here.