Hisatoshi Hayakashi details the JRPG that's for everyone 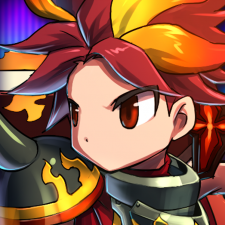 Brave Frontier bears all the battle scars of a traditional JRPG: a hidden power, magic, oversized swords, floppy hair. It’s all there.

This isn’t a PlayStation-era JRPG unceremoniously crammed onto a mobile, though. The game’s creator, A-Lim, decided to take a more considered approach and create a game that felt right for the device.

The finished product is unashamedly a mobile game, with combat a series of taps and the game itself free-to-play, but it still wears that spiky hair and troubled past with confidence.

The game’s executive producer, Hisatoshi Hayakashi, openly cites some of the genre’s classics as inspiration for Brave Frontier. Final Fantasy, Valkyrie Profile, Romancing SaGa, Star Ocean and the Tales Of  series all inspired design in some way.

We are focused on developing games that players can enjoy. It is more important than generating profit.

When creating a game inspired by some of console’s best JRPGs, much like the adaptation of a book to a film, it’s best to do just that - adapt it. That’s why Brave Frontier doesn’t have the traditional over-world - where your character physically explores the game’s environments - of the genre and instead opts for a menu-based over-world interface.

“Originally, we wanted to have players walk around towns and dungeons, but then we thought about mobile devices and small screens and suddenly, knowing how far you were into a dungeon was quite scary, and walking in towns was not as enjoyable as it should be,” explains Hayakashi.

“But I am convinced that if we can somehow represent the fact that players are walking around cities and dungeons, talking to people and fighting monsters, all on a mobile device, they will really get into the RPG world.”

Because of what is essentially the loss of exploration, the team focused on the area where players would instead be spending their time: the user interface. One of the keys to translating the feel of a traditional JRPG to mobile was in system and interface consistency.

The UI is often overlooked, but I still remember the little blue text boxes and the pointing, white gloved hand of Final Fantasy VII’s menus.

“This is a central element to JRPG design, as it creates immersion,” says Hayakashi. “Even if the game world itself is amazing, sometimes there is too much information, you push too many buttons, the timing is not right and you lose focus, you lose interest.

“We wanted to create an easy learning curve, dialogues and sequences that blend really well, and just the right amount of information for players.”

And the UI is just as important when it comes to combat. A lot of emphasis was put into the UI for smartphones, so players could enjoy the combat regardless of screen size.

“We used large buttons for units so players could memorise them,” says Hayakashi. “This would prevent mis-taps, and players wouldn’t have to look around for where to push - they could concentrate on the battle, where the flashy action takes place.

“But if combat was too easy, players would get tired of it, so we made sure it wouldn’t feel that way by adding special weapons and systems, allowing us to create more complex mechanics that are easy to use.”

Much of the appeal of a JRPG is in the character design. The problem is, there are so many games within the genre that it’s difficult to stand out. To make matters more difficult, Western and Eastern audiences often have specific tastes when it comes to their tastes in a protagonist and supporting cast.

We know that Japanese players prefer characters with large eyes and small mouths, but outside Japan it doesn’t work that well.

“Brave Frontier was planned to go worldwide from the very beginning,” recalls Hayakashi. “We know that Japanese players prefer characters with large eyes and small mouths, but outside Japan it doesn’t work that well, so we tried characters with no mouths.

Much of what makes Final Fantasy VII so iconic isn’t to do with the moody protagonist’s oversized sword and undersized mouth, though. It’s in the popping noise as players navigate the menus, or the tingling of nostalgia when the Cosmo Canyon theme kicks in.

Hayakashi understands the importance of sound: “I want players to say, 20 or 30 years from now, ‘I remember that game, it was so much fun,’ whenever they hear the game sounds again. I have worked with composer Hashimoto for over 13 years and all I had to do was tell him abstract concepts like floating sounds and he would come up with perfect sounds.”

When it comes to the game’s future, Hayakashi says the team is planning to support and improve it for a while with new game systems, additional battle systems, new character evolutions and more.

“We are also working on user friendliness, the learning curve, the UI and communications,” says Hayakashi.

Beyond Brave Frontier, Hayakashi wouldn’t be drawn on what projects might be next, but he insists that the company’s focus is in the creative side rather than business-minded.

“We are a creative company, we are focused on developing games that players can enjoy,” he insists. “It is more important than generating profit and expanding our operations. We will not spare time or money to do so. We would like to be such a company and believe it is our mission.”

With the game’s current success across Japan, North America and Europe, it doesn’t look like the team will have to start going around smashing pots to find gold, however. It looks like that creative vision can blossom a little longer.

Can Brave Frontier fight the good fight on two fronts?

Authentic yet distinctive: How Middle-earth: Shadow of War came to mobile