ZPLAY at GDC Speech: Opportunities and Challenges for Western Developers 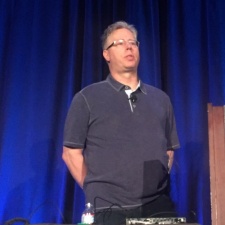 Meanwhile, Randy Barenscott, VP of ZPLAY, is invited to a GDC speech, focusing on the subject “New Opportunities for Western Developers”.

GDC is the largest professional conference and exhibition for game developers, attracting tens of thousands professional CPs to participate each year.

ZPLAY, as the leader in the area of Chinese casual mobile game publishing, has taken part in GDC three times.

Fortunately, we received the speech invitation from GDC this year. ZPLAY is extremely honored to share our views and experiences about the Chinese games market with global developers and gamers.

Randy Barenscott, VP of ZPLAY, made a speech at GDC, taking “Deconstructing China - New Opportunities for Western Developers” as the subject.

He analyzed the opportunities and challenges for western developers to enter the Chinese games market. In the speech, Randy mentioned that developers mainly care about 2 questions – how to improve monetization and how to choose a strong and capable Chinese publisher.

In 2016, State Administration of Press, Publication, Film and Television of The People’s Republic of China announced a new rule, requiring that all mobile games in the App stores in China can’t be launched until getting its approval No.

Global developers have to pay close attention if they want to enter the Chinese market. Meanwhile, only the publishers who own licenses and certificates have the operating and distributing rights.

Therefore, developers need to stay sharp to choose a lawful and compliant publisher as their cooperators in China.

Moreover, the Chinese market is becoming more and more competitive - gamers’ love of games tends to be simplex, with winner-take-all market rule prevailing, putting indie games in a tight spot.

All in all, it is very hard for western developers to better understand the Chinese games market. Faced with these problems, Randy lists a few reasons why it is a good idea to cooperate with ZPLAY.

With a strong ability and rich experiences in global publishing, ZPLAY focuses its business on mobile game publishing and monetization, and can be considered as a trustworthy professional cooperator by global developers.

PopStar!, one of our most successful games, has been a total hit with users and critics alike, and is well referred and downloaded more than 400 million times all over the world.

Over 12 games are featured by App Store and Google Play on home page in the worldwide; ZPLAY owns YUMIMOBI, our own proprietary ad monetization platform and ad exchange.

Its automatic optimization can help developers improve their monetization; as ZPLAY was also a developer in the past, we know developers better and can provide better service to them.

At the same time, ZPLAY has gained the authorized certification from the government, owning all legal certificates, large publishing scale and effective supports to developers provided by over 200 professional publishing staff.

For global developers, the Chinese games market is full of opportunities and challenges. More creative high quality games are needed in the market.

However, no matter how competitive it is in either domestic or foreign markets, it remains unchanged for ZPLAY to help small and medium sized developers to gain more value. In the future, ZPLAY will fight side by side with global developers.

Quality, reputation, innovation: Why you should consider ZPLAY as the publisher of your next game

Mobile Mavens reflect on their GDC 2017 trends and highlights