[Updated] With its monthly sales predicted to rise to $15 million, Chukong looks towards IPO 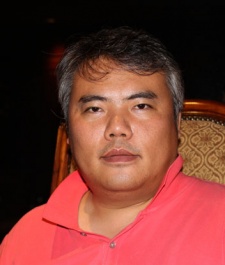 Despite the market's current boom, some mobile game developers at ChinaJoy 2013 have expressed disquiet about their future.

The one man personifying positivity, however, has been Haozhi Chen.

The CEO of Chukong Technologies - the holding company for CocoaChina, China's largest game developer and publisher - has been very bullish indeed.

On one level, this is because Chen thinks the Chinese mobile market is growing much faster than other people think.

While the China Gaming Industry Report reckoned sales in the first half of 2013 were RMB 2.5 billion (around $410 million), Chen says he thinks the value of the market during 2013 will be RMB 12 billion (around $2 billion).

That's up from his previous prediction of RMB 8 billion ($1.3 billion).

"Many companies are taking a bottom up view on the market, but we're taking a longterm approach and looking from the top down," he says, through a translator, concerning those negative attitudes.

Instead, Chen is positive that over the next 3 to 5 years China will become the most valuable mobile games market in the world.

With monthly revenues of around $12 million, mainly from the Chinese market, he says that Chukong/CocoaChina is leading the way.

Indeed, he expects the company's revenues to rise to $15 million a month by September, giving it an annualised turnover of $180 million.

And this growth will provide a solid platform for the company's goal to IPO.

In total, Chukong has received $33.2 million in VC funding from Northern Light Venture Capital, Steamboat Ventures, Sequoia Capital, and GGV Capital; the later taking part in an at-the-time unpublicised C Series Round in 2012.

In the meantime, however, there's plenty to do for Chukong, which operates under the labels CocoaChina for its Chinese publishing and Punchbox for its international operations.

Games such as its Fishing Joy franchise have been ripping up the Chinese charts for years, and it's just signed a publishing deal with Gameloft to bring titles such as Asphalt 8 and Dungeon Hunter 4 to the Chinese Android market.

"This is the first time any Asphalt game will have officially been released in China," says Chen.

As well as overcoming the challenges posed by the game's 800 MB file size (sideloading via PC), CocoaChina has also worked to ensure the game's monetisation options fit local market conditions.

For example, it's done a deal with mobile carriers so players can buy a RMB 30 ($5) per month subscription that gives them access to rent cars in the game.

This is important both in terms of price point and playing well with the frictionless one-click billing offered by the Chinese carriers, who control around a third of revenues in the Chinese mobile game market.

Yet when asked about which part of Chukong's operations are most vital, Chen's reply is surprising.

"Our tools business with Cocos2d-x is key," he says.

His argument is that while it's not yet a direct revenue source, having such a strong technology base impacts the quality of the company's own development, as well as providing it with publishing opportunities.

"People come to us because they know about Cocos2d-x," he explains, adding that in future he expects to extend the platform with deals with advertising and payment companies.

Used by around 70 percent of Chinese developers, Chen also says that providing such a robust and business-focused development tool will give it the advantage over competitors such as Unity and Unreal Engine, which are more focused on special effects and game graphics.