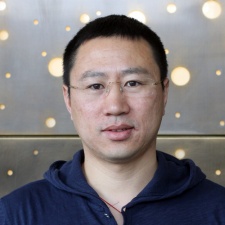 If there are two things the Chinese mobile market doesn't need more of it's app stores and game publishers.

And despite doing both, Michael Tao Song, the CEO of SkyMobi would probably agree.

After all, it's been operating its Maopao app store since 2006.

"That was before Apple's App Store," he points out, when we meet during the GMIC Beijing 2014 conference.

Indeed, Sky-mobi is a reminder that the app ecosystem existed long before the advent of smartphones.

And more than just existed, some companies were very successful, including Sky-mobi, which listed on the US NASDAQ stock exchange under the ticker MOBI in 2010.

At time of writing, its market capitalisation was over $210 million.

Rise of the rest

Yet a lot has changed in recent years.

Although Sky-mobi now makes the majority of its revenues through smartphones that transition has been recent: the first time this happened was its October-December 2013 quarter.

It's also coincided with an explosion in app store competition.

The rise of Android in China, combined with the absence of Google Play, has seen companies such as Tencent (WeChat), Qihoo 360, Baidu (91 Wireless), Xiaomi (Mi Market) and Alibaba, not to forget the three big carriers, all offering their own app stores.

Song says he's not worried about such competition, though.

"We cooperate with them," he says, explaining that Maopao is an "off-line app store".

What he means is Sky-mobi's distribution model is pre-installing Maopao on Android devices.

Yes, you can download it too, but a proportion of Chinese users either don't understand the process or lack sufficiently good data connection to regularly get content in this way.

"One million Android devices are sold daily, and we're on 40 percent of them," Song says.

Over the years, Sky-mobi has worked closely with OEMs and carriers, particularly in terms of the point-of-sale process in their physical retail stores to set up phones with content when customers are buying them.

That might be the case, but Maopoa's 110 million users also download. During the past three months, it's hosted 128 million app downloads.

In that regard, Sky-mobi has the best of both worlds.

Aside from app stores, the other big expansion in the Chinese mobile games market has been publishers.

Sky-mobi may not have such long experience in this part of the business, but this doesn't mean Michael Song doesn't have strong views on its strategy.

The biggest opportunity is publishing casual games from international developers

"So many Chinese companies want to publish games but their focus is hardcore games," he says.

"That's why I believe the biggest opportunity is publishing casual games from international developers."

He says he hopes the company's listed status will overcome the trust issue, especially in terms of handing over source code and providing financial transparency.

This is particularly important as he's not looking for a lot of content. "We want quality. I'd expect less than 10 games this year, " he says.

In conjunction with this move, Sky-mobi is expanding its operations.

It will be opening an office in San Francisco soon to boost its presence with western developers, while it's already operating deals to embed Maopao on devices in Brazil, Russia, Indonesia and Thailand.

SkyMobi looks to expand its instore reach to over 100,000 operator shops in China