Jae Chan Shin is shooting for the sky 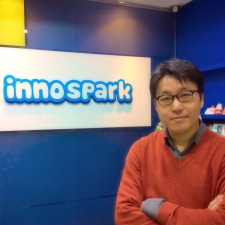 Released in 2012, it's educated millions of players about mobile strategy and that's provided a large addressable audience for developers who want to further develop the genre.

With its debut game Hero Sky due to be released in mid-March, we took the opportunity to talk to CEO Jae Chan Shin about the release and why the studio thinks it can compete with the biggest mobile game in the world.

Pocket Gamer: Can you give us some background on Innospark?

Jae Chan Shin: Innospark is an indie game studio founded in 2012 by key members of the #1 top-grossing game Rule the Sky.

Our team is based in South Korea and consists of more than 50 people who are super-passionate about making outstanding mid-core games for players all over the world.

What have you learned from Rule the Sky that has shaped the development of Hero Sky?

We launched Rule the Sky in 2011 and learned a ton about mobile gaming and how people play mobile games socially. And while we had a great time working on the game - which let players peacefully create their own floating island in the sky - we also found that players seemed to really enjoy the concept of floating islands.

We took this "wow factor" and used it to conceptualize the floating island setting in Hero Sky: Epic Guild Wars as well.

Additionally, we noticed there was a lot of demand for competitive combat from male Rule the Sky players, since that game was much more peaceful.

That's why we created this new setting for Hero Sky as a combat strategy game.

The mobile strategy genre is very competitive so why do you think Hero Sky can find a place alongside the likes of Clash of Clans, Samurai Siege and Castle Clash?

We think there are a lot of great strategy games that are on the market, but we believe that Hero Sky offers a very different experience with three key features: an emphasis on developing heroes, social guild features, and real-time defense mode.

Hero Sky is best described as the next generation of hero-based real-time strategy on mobile.

Unlike other games, Hero Sky starts players out with a mighty hero character already on their side - and this hero can gain experience levels, and grow more powerful over time by evolving, like a character in a traditional role-playing game.

We like to refer to our gameplay as "role-playing strategy," since players can also unlock dozens of customizable heroes over time and end up with a massive collection of these powerful characters, and deploy them a bit like an adventuring party in a RPG.

In Hero Sky, players can also band together to form guilds to pool their resources and troops to form a massively powerful guild.

The game adds social functions to guilds, which lets players enjoy a much more connected experience as they join up and build a prosperous community together within their guild. Once players try the game, they will definitely notice how all our exciting guild content makes a huge difference!

Additionally, in Hero Sky, players can experience real-time defensive battles with the Hell's Gate mode, in which players must strategically defend their islands against Hades' invaders in massive battles on their own home turf.

As a Korean developer, do you think Asia players want a different experience to western gamers?

We think that at the end-of-the-day, players from all parts of the world want a fun game experience that offers a lot of variety and, ideally, that lets skillful players show off their stuff in competitive play.

To that end, we're packing Hero Sky full of diverse heroes from various cultural and national backgrounds to appeal to a wide range of players.

Additionally, we will be updating the game with more heroes as we get more player feedback.

A key part of the game is the ability to customize bases and collect heroes. Why do you think these are important features?

Yes, Hero Sky offers players the ability to customize their bases and amass a huge collection of heroes. We feel these are both important parts of the game as Hero Sky offers not only active attacking battles in which players raid enemy bases, but also includes defensive battles - which is really the game's key unique point.

Players can enjoy infinite strategies as they develop their heroes while combining them with different types of troops. With the Hell's Gate defensive battle mode, players can experience real-time defensive skirmishes as well.

Since Hero Sky provides such strategic fun with different combinations of troops and heroes, we feel that it can be best described as the next generation of hero-based real-time strategy on mobile platforms; a successor to classic games like Warcraft III: Reign of Chaos.

What do you think is the most impressive thing about Hero Sky?

We think the heroes add a lot to Hero Sky - from the very beginning of the game, players start off with this massively powerful character in their army, and over time, using hero summoning or evolving, they will gather a sizeable collection of different heroes with a huge variety of different skills and abilities that will let them tackle the game in very different ways.

We really feel that the added power, variety, and flexibility of heroes - which are available from the very beginning - will add a ton of depth to Hero Skyas players unlock, collect, combine, and tweak their roster to create unstoppable armies.

5 tips for launching your mobile game on Windows 10

DomiNations surpasses 3 million downloads in Japan, Taiwan, and Korea after only one month