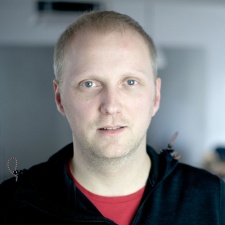 The road to finding hardcore gamers on mobile is - as yet - strewn with failures.

But that doesn't mean more start-ups aren't attempting to reach the fabled riches it leads to, and VCs also seem keen to fund that dream.

One such developer is Directive Games.

It's also just closed a $3.5 million funding round.

High stakes for sure, so we decided to find out more about Directive's ambitious plans from CEO Atli Mar Sveinsson.

PocketGamer.biz: Building a tools company and a games company is a difficult balancing act. Why have you taken this approach and why do you think you'll be successful in terms of commercially available tools and games?

Atli Mar Sveinsson: Yes - it is definitely a balancing act. But we strongly believe that technology and tools can't be built in a vacuum. We want and we are building tools that solve real problems and make everyday life easier for developers, starting with ourselves!

Building technology thinking of what problems developers might or might not face rarely leads to very effective results initially. At least not until there is a very large community behind a particular technology or service.

Also, many studios are currently building the technology and backend tools internally at the moment, which is a huge commitment in terms of time and money. We want to empower developers so that they can free themselves and focus on building great games.

Company culture is very different in Europe and China. How do you expect to keep everyone in the company happy?

It is true that our company operates across very different cultural backdrops.

I think a "melting pot" of talent and skillsets from different culture makes the company more powerful.

But companies are built by people who seek similar things: namely a love for games - and of course games culture is global - but also an exciting working environment where individuals strive and grow, where passion and creativity are unleashed.

Our goal is to establish that culture in the offices that we have today and in the ones that we may open in the future.

Similarly, you're going to be running a mainly Chinese-staffed company with a mainly European executive team. Do think this will be a longterm issue?

Not at all. In our company, founders are American, European and Chinese, all with deep backgrounds in games. I'm from Iceland but I've lived in China for many years, mainly because I'm inspired by what is happening in this country and I respect the talent here. So much energy!

Personally I think a "melting pot" of talent and skillsets from different culture makes the company more powerful. We're certainly proud of this, and believe it will help us attract the best talent in the world.

There haven't been many examples of Chinese-developed games being successful globally. Why do you think you can solve this problem?

Perhaps that has been the case on mobile, I think mainly because of cultural miscues.

We don't think that location of development matters much to the success of the game. Development approach, production values and knowledge of the audience is what is most important.

For example, those western games that are very successful in Asia are normally the ones with a deep and significant meta-game component because that's the aspect of the game that players are crazy about in the region.

So, being in tune with the audience preferences towards gameplay increases the odds that an IP may transcend cultures.

Talking to existing BaaS providers, it seems that the problem of running large online games is already comprehensively solved. What will you be doing that's different to the current consensus?

We don't want to ruin the surprise here, so forgive me for speaking in only very general terms at this early stage. We are trying to think out of the box in many ways.

You could argue that before the iPhone the problem of communication among people was solved! But then a fresh breath of air comes around and changes the way people look at problems and opens opportunities.

Things have to evolve and I believe a focus on community is the key.

Many experienced start-ups have tried to solve the 'mobile hard/midcore problem, but it seems that mobile gaming is just more casual experience, at least in the west.

Why do you think you can be more successful, especially as you point out, the charts are generally static and controlled by companies with massive UA budgets?

We are convinced that players are looking for more higher quality experiences on mobile as well. That is a function of not only a higher bar of production values, but also more powerful hardware coming to the market.

The best games will rise to the top, not those backed with "burst" spends.

Our team's DNA is from the hardcore end of the spectrum, that's where we come from, but that is balanced by members with expertise in mobile free-to-play games. We are well positioned to be able to provide that depth and engaging game play that discerning players are looking for, with monetization models that feel natural and not intrusive.

Our belief is that by building a hardcore experience, based around transmedia IP, we can avoid the massive UA budgets that only a few companies are able to work with the moment.

Encouragingly, it is now clear that Apple and Google are moving away from automated algorithms in their ranking system. We are going to see human "curators" coming back in force - and I know those people love games as much as we do.

That will be very healthy for the entire ecosystem, as the best games will rise to the top, not those backed with "burst" spends to game the system.

Quality and a deep appreciation for your players is the future in mobile games, you can quote me on that!

You can check out what Directive Games gets up to via its website.