Behind the scenes with Gamevil's Danny Park 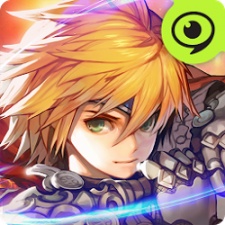 Developed by Seoul-based startup Cocoonbeat, it's an anime-styled, free-to-play, gacha-powered RPG of the kind we've grown used to seeing rise to popularity in Asia.

There is a twist, however. With a pinch of Monster Strike and just a dash of Angry Birds, the game's combat system has players propelling units towards enemies as though they were slingshot powered.

It's a neat system, and one that works well within the well-established framework of a Korean RPG. But how did the idea come about, and what was the development process like?

PocketGamer.biz: How and when did the partnership between Cocoonbeat and Gamevil first come about?

Danny Park: Gamevil reached out to Cocoonbeat when Knight Slinger had just started the closed beta in January 2016.

The developer was searching for a partner to extend the service globally and Gamevil was the obvious choice.

How did the two companies collaborate?

Gamevil provided feedback and ideas from each of its branches, more than the development team could incorporate (due to time constraints).

But chiefly, Gamevil helped the dev to understand the global market.

How big was the team on Knight Slinger, and how long was the total development time?

The dev team started the development with five people, grew to 10 people in the next year and reached 18 in the last production phase.

The project took a relatively long time compared to most mobile games.

The combination of RPG and slingshot was fairly new in the market then. We couldn’t refer to any existing games and had to iterate all the time to reach the right balance.

Are there any major differences between the versions launched in the US and Europe and Asian territories?

The only major difference between the versions launched in the US, Europe and Asia is the voiceover content.

It’s going to take some time before Western gamers broadly adopt Eastern mechanics such as auto-play.

We are currently supporting 13 languages for our voiceovers. In regards to the actual game content, there is no difference.

Do you see that the Western appetite for this style of game is increasing, with Western developers increasingly adopting mechanics such as gacha?

The Western appetite is increasing, but not at a fast pace.

Although the gacha mechanic has been adopted, we still believe it’s going to take some time before they broadly adopt other Eastern mechanics such as auto-play.

What is the total number of different Warriors in the game? How did you ensure each felt distinct for the player to recruit?

There are about 300 warriors (around 500 including ‘evolved’ warriors).

Warriors are granted with a leader skill (appointed warrior only), individual skills, stats and awakening. They can equip runes and equipment to boost their abilities as well.

You've made the process of recruiting new Warriors quite the spectacle, as 3D Dragons fly at the screen. How important is it for gacha mechanics to be presented in a memorable way?

We think that it’s important for the users to enjoy the process.

It’s necessary to show that every gacha attempt is worth a shot.

Users are required to either spend money or virtual currency to participate, while the result isn’t guaranteed. It’s necessary to show that every attempt is worth a shot.

The ‘slingshot’ aspect of the game made it challenging. As mentioned earlier, we wanted to incorporate both RPG and slingshot into the game.

Our goal was to create a game that anyone can easily enjoy. This is why other slingshot games weren’t used as reference. Finding the right balance was the most challenging part.

How much iteration was there around the game's combat system? Was Mixi's Monster Strike an inspiration?

We were already in the process of developing the prototype when Monster Strike was released. Despite its huge success in Japan, we did not turn to it for reference.

Following its success, there were a lot of opinions about the game’s battle system (adding combo attack when colliding with allies, ‘bonus’ system and a feature that allows friends to play).

None of these were really on our agenda in the first place.

Monster Strike is closer to pinball, while Knight Slinger is more towards RPG. We’ve invested our time and energy to come up with the game’s own unique combat style.

Auto-play is a staple of RPGs in South Korea, but do you think it's now becoming increasingly common in the West? How have Knight Slinger's players responded to it?

Repetitive play is one of the essential elements that defines an RPG.

It’s true that repetition can be lacklustre. It’s one of the reasons why Korean RPGs aren’t very successful in the Western market.

Repetition can be lacklustre. It's why Korean RPGs aren’t very successful in the West.

Western audiences tend to engage in games rather than depending on auto-play as many Asian users do. Knight Slinger, though, doesn’t necessarily require auto-play.

Instead of spending Stamina to play, the users can build up their Warriors with the Guerilla Dungeon and the Elemental Dungeon.

The users essentially have to play one battle instead of 10, but will be using more in-game currency.

The game does have auto-play, but its use is minimal. We’ve structured it so that the users can play, clear and move on.

What was your approach to tutorial design, especially for a Western audience who may be less familiar with this kind of layered metagame?

We wanted to make the game easy to play. RPGs can be fun, but the rules are tricky.

This is why we went with the ‘drag and launch’ system. In the beginning, the tutorial solely focuses on teaching the user about the battle method.

The tutorial continues on as the player progresses. For instance, when one of the warriors is ready to be evolved, the tutorial will automatically begin to guide the user.

How did you go about designing real-time PvP, and how important is it to your long-term vision for the game?

It was designed so that the users can show off their skills, while putting in a good amount of effort to do so.

For instance, boxing has what’s called bantamweight. All the players weigh equally, but there are components that need to be earned by dedicating time and effort.

Those components include muscle, reflex, endurance, force of punch, etc. As such, users can make up what they’re lacking by continually playing and building up.

Currently, the PvP is more of a friendly battle. We’re planning to revamp the mode early next year. A ranking system will be implemented as well.

What were the most significant lessons you learned from soft launch, and what changes did you implement as a result?

The game was soft-launched in 14 countries. We detected numerous bugs and saw network instability in certain regions.

Asia’s been performing well. US and Europe are steadily improving.

Through the process, we were able to optimise the game connection and are continuing to improve upon that.

How happy have you been with the global launch? In what territories has the game performed best?

Asia’s been performing well. US and Europe are steadily improving.

What's next for Knight Slinger?

New content is underway! Players can draw premium warriors through specialised summon system as well as through updated guild and raid systems.

We’re also working to make it easier for the new users to settle in, so please be on the lookout for upcoming improvements.