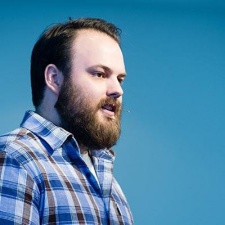 This time, it's Phil Larsen with his playing habits in the spotlight. Larsen spent six years at Fruit Ninja developer Halfbrick, before setting up new studio Prettygreat with Luke Muscat and Hugh Walters in 2015.

Phil Larsen: It would have to be Triple Town by Spry Fox - an ancient game by mobile standards, but I've only recently gotten into it, and it's a true masterpiece!

I’ve been playing for around two months, but I don’t see myself playing much longer.

Triple Town was one of the first true innovators of the match-3 genre.

I think I’ve reached my skill cap, where the effort required to become marginally more proficient at the game isn’t worth the time.

This was one of the first true innovators of the match-3 genre.

I’d barely call it a match 3, as that name implies Bejeweled and its countless imitators, which Triple Town is most definitely not.

It always feels like you are genuinely accomplishing something, moving forward and building a world that feels different than the last time you played.

It has immense tactical depth that is instantly accessible.

Within minutes you completely understand basic strategy, and are placing even the first shrubs at odd places because you’ve already formulated a long-term plan.

I’ve never felt compelled to do that in most puzzle games, but this is where its beauty really lies.

Fewer bears, which get in the way and block off town space at very inconvenient times! But that’s my biased, non-designer opinion.

They are absolutely necessary to the balance of the game and it’s one of those cases where removing them would do more harm than good.

It proves to me that there are many more secrets to uncover within the world of puzzle games.

The next monster puzzle hit is out there, waiting to be made.

It’s almost an unlimited well of ideas to explore. The next monster hit with innovative and accessible gameplay is out there, waiting to be made. Someone just has to do it!

Game developers must constantly be playing - they don’t even need to consciously evaluate games and turn it into an exact science. But taking everything in and letting it mix with your own creativity is incredibly important.

The result is you can find an idea that’s perfect for your game, which is inspired by something else, despite the new idea being completely original and not in any way resembling the source of inspiration.

Your mind makes the connection and forges a new road with it.

Land Sliders, the first game from ex-Halfbrick start-up Prettygreat, to launch on 24 September

Hall of Fame: A slice of life with Fruit Ninja designer Luke Muscat