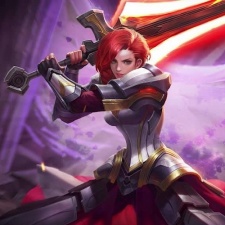 Launched originally back in November 2015 for China, Arena of Valor (or Honor of Kings as it's known in its home country) has been nothing short of a monumental success. The numbers that surround the popular MOBA continue to impress in its home territory to this day, though success in the West has not been replicated on the same scale.

Across the US and Europe, the game has pulled in just over $15 million and $12.6 million respectively (via Sensor Tower). But compared to China, this number is fleeting with the nation now claiming the majority of its $4.5 billion revenue at an estimated 96 per cent. Additionally, the developer TiMI Studio (a subsidiary of Tencent) claims that the game has seen a rise in month-over-month daily play numbers since making "major optimisations" in late 2019

After triumphing in Asia and attempting to crack the West, Arena of Valor has now launched across 67 new countries and regions including the Middle East/North Africa (MENA) and Russia.

To find out why the studio has decided to focus efforts on these new territories and why now in the middle of a global pandemic, we spoke to Arena of Valor executive producer Ray Ning and TiMi Studios international business director Vincent Gao.

PocketGamer.biz: Why is now the right time to launch Arena of Valor in Russia and MENA Territories?

Ray Ning: TiMi Studios continues to invest in Arena of Valor and its global player base. Adding new servers isn’t just flipping a switch. We needed to assure we'd have a polished, localised and relevant version for new audiences before we make the commitment. Launching in Russia and MENA bolsters Arena of Valor around the world as the leading mobile MOBA game and gives more players a great competitive game.

These are highly relevant growth markets for mobile games - especially for an innovative and high-quality mobile experience like Arena of Valor. The MENA games sector is growing. MENA games are growing even faster than global market rates with the high penetration of mobile devices and the young population demographic.

The region is also coming alive to esports, with more people becoming esports fans and regional esports athletes competing and winning at a global level. Russia has a tradition of players who are passionate about core and competitive games. This is historically a place where free-to-play PC games have dominated but Russia’s market is shifting more toward mobile games, with mobile gaming expected to be the fastest growing segment in the years to come.

TiMi wants to have a deeper relationship with players around the world. China is a fast-changing market so we’ve had years of experience learning how to move quickly to satisfy the constantly changing tastes here at home. Arena of Valor has brought our advantages in competitive mobile game development to previously 82 countries and regions and now we’re adding 67 more. We expect to continue to help grow the global mobile game industry - especially when it comes to full-fledged core games.

Since the coronavirus pandemic begum, have you adapted the game to suit the circumstances? If so, how?

Ray Ning: Arena of Valor is going to keep focusing on giving players a really high quality MOBA experience - regardless of what’s happening around the world. As part of Tencent, we're proud of our company's overall efforts to save lives and help people around the world.

Vincent Gao: TiMi Studios and its publishing partners are promoting the World Health Organization Play Apart Together campaign. Aimed to encourage players to practice social distancing through gameplay, the initiative incorporates WHO messaging about coronavirus through games and communities.

Arena of Valor promoted the messages in its growing community of 200 million registered players worldwide. Activision sent a system-wide message about it in Call of Duty: Mobile, which is developed by Tencent. Call of Duty: Mobile has more than 150 million registered players (via Activision) so there's a very large audience of players in TiMi games who are seeing this campaign.

What countries are next planned for Arena of Valor to be rolled out to? When should we expect this?

Ray Ning: We're focused on welcoming new players into Arena of Valor and listening to their feedback. And with the game available now in more than 140 regions and countries, we feel like it's just about playable anywhere. We'll have plenty of work to do improving the game and making sure we're giving players the best mobile MOBA game on the market.

When we launch in new territories, we do not pursue success only in data but care more if the localised game can really bring to local players a good gaming experience.

What numbers or results do you need to see from a country to consider it a success?

Ray Ning: Success is really defined by our vision: globalisation of mobile MOBA games and mobile esports. The real success is to bring to more players around the world better competitive mobile gaming experience. Arena of Valor's registered players number accounts for a significant percentage of local population in regions like Thailand and Vietnam. This is a number most games cannot achieve and see as success.

But for us, what's important is to keep current players constantly engaged through improved gaming experience and encourage the rest to try mobile MOBA games. With this mindset in mind, when we launch in new territories, we do not pursue success only in data but care more if the localised game can really bring to local players a good gaming experience.

Retention is a huge factor that has helped Arena of Valor continue to be so popular? How as a developer do you make sure to keep your core audience happy and coming back for more?

Ray Ning: Arena of Valor has three pillars that help it stand out as a mobile MOBA. First is our team at TiMi Studios has a deep understanding of the genre. We can innovate and make changes rapidly to help us deliver more fun for players. Whether that's delivering new content, maintaining the competitive integrity of the game or optimising the overall experience to make it feel better, our team is incredibly talented and motivated to deliver a great game for players.

The Arena of Valor team has always set a high bar for quality, even pointing the way for the globalisation of MOBA as a mobile game as its mission. When it comes to art performance, hero design and game play we have set a very high standard.

The third part is that Arena of Valor operates at a global level for competitive integrity while allowing regional managers in each market to identify in-game content that appeals more directly to a local audience. This allows us to cater to local players and assure the game feels fresh. It also allows the team to assess what are truly global problems and what are local problems and work to fix things on both levels, depending on the need.

Can you provide us with any news stats or data surrounding Arena of Valor as a whole? Downloads, financial revenue, DAU, etcetera.

Ray Ning: Well, we shared that Arena of Valor now has 200 million registrations, which is an exciting number for us to share. We had some major updates toward the end of 2019 and since they've been added to the game, we've had consistent month-over-month growth in our daily play numbers.

What does the future hold for Arena of Valor?

Ray Ning: We're optimistic as the game has a young player base - most of our players were born in 1990 or later. We’re among the top mobile MOBAs in several Asian regions, including South Korea, Thailand and Vietnam. In the last two, where mobile is the predominant platform, Arena of Valor is really a cultural phenomenon.

We get asked about traditional gaming markets a lot. Players there continue to gravitate to PC for MOBA. Arena of Valor is among the top-ranked mobile MOBAs but those regions haven’t reached critical mass with mobile MOBA yet. We’ll continue to support players around the world and welcome newcomers with so many new communities welcomed to the game with these new servers.

Can you tell us about the unusual Arena of Valor deal with KFC that allows players to unlock Colonel Sanders via a meal loot drop in Taiwan?

Ray Ning: The KFC partnership was a big success and we're glad you noticed it. It's important to also point out that Garena, our publishing partner, was a big part of making it happen. We talked about it earlier and this is a great example of how Arena of Valor takes a different approach with local markets.

Arena of Valor can create content that is more specific to a region - like the deal with KFC to have a Colonel Sanders skin for Ormarr in-game or another example is creating an authentic Thai boxing skin for Raz.

How did this deal come about and why did you feel it was right to include the fast-food mascot in the game?

We can't succeed as a truly global studio without the continued success of our own IPs in the global markets.

Ray Ning: Garena was already working with KFC as a sponsor for Arena of Valor esports. They had already provided themed meals for the Arena of Valor International Championship in both 2018 and 2019. And this partnership will continue at the local level in Thailand as KFC is set to be the pro league’s official partner.

Can you tell us about the partnership Timi has with The Pokémon Company and the game in development? Anything you can tease for what people should expect?

Vincent Gao: We can't say too much just yet, beyond that we're really happy to be working with The Pokémon Company. They're a strong partner to work with and committed to making sure we can deliver a great game. We'll be sure to share more when we can.

Partnerships and collaborations seem a daily occurrence for the company, can you tell us how these come about and how the company decides what is right for them?

Vincent Gao: Good question. Apart from self-developed IPs like Arena of Valor, we are excited to work on several great established IPs with launches scheduled all the way through 2022. Each and every partnership we have with top-class brands is a huge opportunity and we recognise and appreciate each of them.

TiMi wants to work with the best brands in gaming so it's important when given the chance, we succeed and deliver fun games that please the existing fanbase and welcome new players to the brand as well. That's really our pursuit for any IP we work on.

For you personally, what franchise or IP would you like to develop for next?

Vincent Gao: We have several world-renowned IPs in our pipeline. Though we are not ready to share the news now, I am very excited about each and every one of them. Equally important is our own IP. We can't succeed as a truly global studio without the continued success of our own IPs in the global markets.

We are working on several original IP projects for global audiences that we'll give them time and opportunity to complete on their own schedule. We're also currently hiring for a new North American studio and long-term, we anticipate this team to be integral to creating new IP that can attract global audiences.