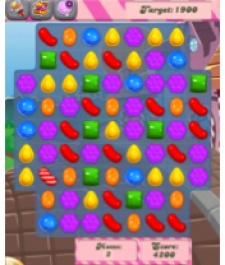 In an interesting move, King's turned to television commercials to shore up its user acquisition campaigns for Candy Crush Sagain Japan.

King has taken to the airwaves with Candy Crush commercials before - with examples surfacing in the US back in April of this year - but the move in Japan is noteworthy given recent success stories.

Using Japanese actress Mikako Tabe (known for her appearance in the Sailor Moon musicals) for a pair of commercials, King became the first foreign company to market a mobile game with via TV spots in Japan.

Yet the commercials have had an intriguing effect on Candy Crush Saga's performance on both iOS and Android.

Analyst Dr. Sekan Toto notes that Candy Crush Saga is currently the top free game for the iPhone in Japan - no mean feat, given the pressure of competing games on Line - but it's only managed to climb to 15th place overall in the top grossing charts.

On Android, Candy Crush Saga has actually fared a bit worse as Serkan Toto also notes that it actually declined on the Android top grossing charts following the commercials - although, it's not entirely clear what caused the slip.

What is clear, however, is that King will need to be invested in the costly TV advertising campaign for the long haul, as Puzzle & Dragons ran its commercials for a period of months to maximise their user acquisition potential.