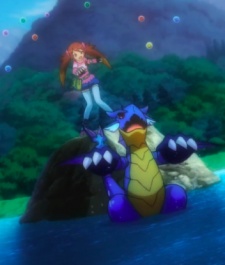 Dubbed Puzzle & Dragons Z, the game introduced a coherent storyline and world for players to explore while keeping the focus on the match-three style of gameplay that propelled its mobile predecessor to the heights of success while stripping away the freemium elements.

But don't pity Pikachu too much too much; Pokemon X and Y has sold 3,360,163 in Japan alone since launch.

A new challenger has appeared

Market research firm Media Create notes the main purchasers of Puzzle & Dragons Z are consumers in their late 30s and early 40s, fueling speculation that parents are buying it as a Christmas gift for children.

If true, this would mean that Nintendo now faces a rare challenge to the hegemony of its first-party titles on the 3DS.

Despite GungHo eclipsing Nintendo's market cap earlier this year, the 3DS is a viable - and popular - gaming platform in Japan with an estimated 14 million combined units sold since launch.

Puzzle & Dragons Z is due for a release in North America in 2014.