We need to find growth that's not based on more users, says Youzu CEO 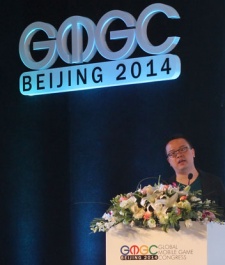 With 500 million smartphones expected to be sold in China in 2014, you might think that would be the key driver for the growth of mobile games developers.

According to Qi Lin, the CEO of online and mobile developer Youzu, however, that's a short term attitude.

In a thoughtful speech - via translation - at GMGC 2014, instead he looked to what developers could learn from the strengths of traditional business.

"We have high growth but we are not mature," he said.

Using the example of the Susino Umbrella Company, which bought Youzu in a deal that valued the developer at over $600 million, he pointed out that it sold products to 160 countries.

"Our games are exported to only 40 countries. Our network is lagging behind the umbrella company. We have a lot of improve on, especially in terms of providing services to our users," he said.

Getting more specific, Lin compared the Chinese market with the mature markets in Korea and Japan.

"There are so many tiny steps we need to make, especially in terms of pricing strategies," he said.

"We need to focus on the development of game IP so we can release auxiliary products. Chinese companies are not very good at this. But this is where the opportunities are.

"This is growth that isn't based on more users."

Welcome to the jungle: 10 challenges and opportunities in the Chinese mobile game market

If you want to IPO in China, you have 6 months, says Ourpalm VP