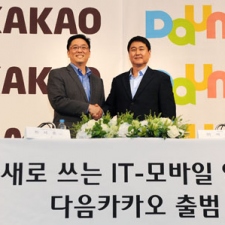 South Korean internet outfits Daum and Kakao have announced they are to merge.

Something of a surprise given Kakao was planning to IPO, its shareholders will get around 1.6 shares in the merged company for each Kakao share they hold, valuing Kakao at around $3 billion.

The deal is expected to be completed during August 2014 and the resulting company will be called Daum Kakao.

The move is broadly complimentary with Daum being the more established internet services outfit, while Kakao has experienced explosive growth in usage of its KakaoTalk mobile messaging platform particularly within Korea.

However, given competition from Tencent's WeChat, LINE, and the Facebook-owned WhatsUp amongst others in southeast Asia, this deal gains Kakao the experience and resources of Daum.

For its part, Daum gains access to the more than 145 million users of Kakao's mobile messaging platform.

Based on 2013 revenues, Daum Kakao would have annual sales of around $750 million.

"Both companies have unique strengths that complement each other while sharing common values championing collaboration, openness and a strong belief in a non-hierarchical work culture," said Daum CEO Sae-Hoon Choi.

"We believe that Kakao's strong market position in the mobile sphere paired with our excellent content service and 20 years of operating experience will yield powerful corporate synergy."

Kakao co-CEO Sirgoo Lee echoed this, saying, "The joint corporation will grow as a business centered on communications, lifestyle and content bridging mobile and web".