Having informed Romanian devs, Pocket Gamer and SkyMobi head to Budapest on 28 August

A bridge between China and Eastern Europe 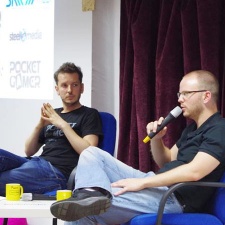 In partnership with SkyMobi, one of China's most successful mobile games publishers, Pocket Gamer has embarked on a touring quest in Eastern Europe in August, visiting development hubs and networking with indies in Romania and Hungary.

During the first meet up, which was held on 18 August with to Romanian developer MavenHut, and hosted by the TechHub Bucharest, the Romanian Game Developer Association invited Teddy Florea, senior business development executive at Steel Media, and William Heathershaw, head of international marketing at SkyMobi to provide insights of success in different markets.

Florea spoke about the importance of outreaching and networking in the mobile gaming industry" for indie developers, while offering insights on how to benefit from editorial coverage, how to market your game to consumers, on the various facets of securing an efficient PR agency promoting their games, as well as on the importance of networking at events and conferences.

He also touched on the importance of the Pocket Gamer Connects conference as a central element of the current mobile gaming ecosystem for getting in touch with the latest developments and innovations in the industry and reaching out to top decision makers from publishers, developers, and service providers.

Heathershaw presented insights about the growing Chinese mobile gaming industry, while offering guidance on the differences of publishing games.

When he asked the audience 'Who had already published their game in China?' only one developer raised his hand.

But the follow-up question - 'Who wants to have their game in the Chinese market?' - resulted in every hand being raised.

Similarly, is the game built on a leading engine like Unity or Cocoas which helps ensure a smooth localization process? These indicators are the guidelines for any indie developers' 'China-first' strategy.

The event also featured a milestone as SkyMobi is thought to be the first Chinese mobile game publisher to have officially visited Romania.

Andrei Istrate of the Romanian Game Developers Association underlined that there is growing interest in the region's mobile game developers.

"We have a couple dozen independent developers, many who are alumni of EA, Ubisoft, King (who have office here) and several success stories like those of MavenHut and Mobility Games," he said.

Pocket Gamer on Tour's next stop is Budapest, Hungary on 28 August.

You can find full details and sign up here.