Google launches its first $100 Android One phones in India

Targetting the next 5 billion 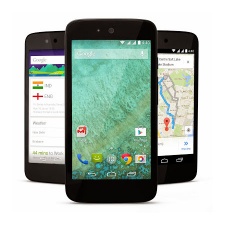 For years, Nokia has been the de facto mobile brand for the developing world.

Even Steve Jobs joked about the company's ability to make amazing hardware at a $50 price point; not a market he wanted Apple to be in, of course.

Google is more than happy to get Android devices into the hands of billions of customers, though.

Together with hardware partners Micromax, Karbonn, Spice and chipmaker MediaTek, Google has launched the first devices in its Android One initiative in India; albeit at the local equivalent of around $100.

Ironically it's happening at the same time Microsoft is killing off the Nokia brand.

Google's plan is straightforward. It's looking to enable the best quality smartphones possible in markets were the average monthly salary is around $250.

That means universal features such as big touchscreens and front- and rear-facing cameras, as well as local features. In India, this includes a built-in FM radio, having the option to use dual SIM cards, and replace the battery.

Google is also working with local operators such as Airtel (in India) with free data scheme that provide software updates for six months and allow 200MB of Google Play downloads per month.

Free data remains a big issue for users, even in countries like China.

More generally, as the company looks to roll out hardware to countries such as Indonesia, the Philippines and Bangladesh, Nepal, Pakistan, and Sri Lanka during 2014, OEM partners signed up to make devices include the likes of Acer, Alcatel Onetouch, ASUS, HTC, Intex, Lava, Lenovo, Panasonic, Xolo, and chipmaker Qualcomm.