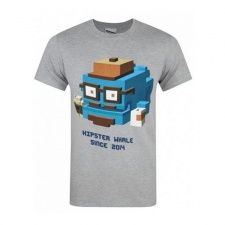 Making the most of its global appeal, Australian developer Hipster Whale has launched an official merchandising store for Crossy Road.

Highlighting some of the many blocky characters in the game, the Crossy Road Store hosts a range of officially licensed t-shirts, with more clothing products, gifts, figures and accessories to follow.

With over 90 million players since it was launched in November 2014, the games remains the poster child for indirect revenues streams, having generated over $10 million in advertising - mainly incenticised videos.

The addition of the store just demonstrates how wide its appeal now is.

Indeed, the website launched in English, Spanish, Italian, French and German, with Korean, Chinese and Japanese to follow, and offers a free worldwide shipping service and the option to pay in one of thirteen different currencies.

There's even a special 10% off deal for early spenders.

"We think there's something for everyone in Crossy Road and we have worked hard to ensure that universal appeal is evident in our clothing range as well as our game," said co-created Matt Hall.