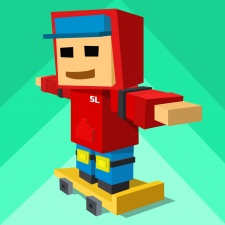 underDOGS, the Mumbai-based mobile games studio, has announced that its latest game Skatelander is to be released on Google Play in conjunction with Dutch publisher Spil Games on 15 October.

The iOS version of Skatelander, which will be receiving a major update on the same day, was self-published on 1 May and featured by Apple in 89 countries.

The publishing deal with Spil Games came about following the game's nomination in the Best Game Art category at Casual Connect Asia, and the two companies have been working together for two months to ready the iOS update and the Google Play release.

"We are just a 4 member indie studio based in India with no process oriented routine. Since we started working with Spil Games on Skatelander, we learnt lot more than we expected," says underDOGS Founder and CEO Vaibhav Chavan.

"The keen eye on details, the importance of user experience, shipping the product only when it is ready, and a lot more. We were really amazed by the speed of working and discipline Spil followed with us, which eventually helped both of us to bring out the best in the product very fast."

With 100,000 organic downloads aleady under its belt, underDOGS will be setting its sights high with the additional involvement of Spil Games.

You can download Skatelander now on the App Store. The update, along with the Google Play release, will be arriving on 15 October.