What Hipster Whale did next 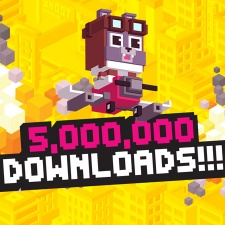 The company was formed by the pairing of Crossy Road developer Hipster Whale with entertainment industry veterans Ben Britten and Matt Ditton - which has resulted in Shooty Skies being known as Crossy Road meets a shoot-'em up.

And, as with Crossy Road, its downloads numbers continue to grow thanks to a strong update frequency, which is tied into the game's range of playable characters.