Thanks to AOL 1, Akamai and The Specialist Works 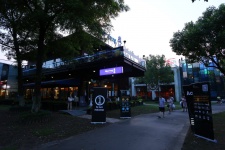 A tumultuous downpour couldn’t dampen the spirits in Shanghai, as developers, publishers and ad specialists from around the world descended on the Blue Frog bar for a night of informative talks, good natured networking and the essential 'lucky draw'!

Once a few libations had been consumed, Richard Downey of the Specialist Works led off the sessions with an insight into their distinct approach of applying measurable metrics to TV advertising campaigns, using the case study of their extensive campaign for Elex’s Clash of Kings.

Akamai’s Vincent Low continued with a short talk entitled 'why player's leave', revealing that over 95% of players leave games within the first 30 days primarily due to some form of friction (be it dificulty of game, payment issues, or performance issues - the latter of which their market-leading server solutions can help elimimate). He also shared some of the eye-watering numbers to show Akamai's scale with over 200K servers in 110 countries accelerating over 40 million hits (and 30 million terrabits of information) every second!

Next up Nola Solomon introduced AOL 1's one-stop platform approach to advertising including a programatic marketplace, video, managed media creative solutions and a suite of monetization options all connected in one simple SDK.

She also underlined just how important video advertising was proving, with engagement rates of 7x other ad mediums and 65% of the spend being driven by leading Fortune 500 brands in avariety of fields.

The whole crew came together for a vibrant panel session, offering some insightful tips for working with brands, making the most of TV advertising, staying on top of your data, finding strong local partners and staying open and bold in an ever changing market.

And the night ended with the traditional Lucky Draw, doling out a variety of prizes to excited attendees including some cool Rio Olympic plushies and an Apple Watch!

Thanks to all that came along and supported, you can check out some pictures and tag yourself on our Facebook gallery.

Also super huge thanks to sponsors AOL 1, The Specialist Works and Akamai for their support.

Join us for our PG Mobile Mixer at Chinajoy 2016