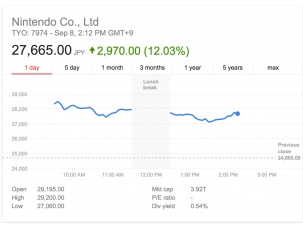 For the second time in a matter of months Nintendo's share price has spiked sharply overnight on the back of a mobile game announcement.

In reaction, at one point Nintendo's shares were up as much as 18%, before settling down to a still impressive 11% rise towards the end of Tokyo's trading day.

Whilst the reaction to the tremendous success of Pokemon GO that virtually doubled Nintendo's share price in August may have proved something of a false start (and indeed was rapidly reversed when it became clear to investors that Nintendo's interest and upside in the game were limited), this reaction to the imminent arrival of one of Nintendo's wholly owned crown jewel IPs should be on more solid ground.

Notably, the announcement of an Apple Watch version of the wildly Pokemon GO - which has grossed over $400M in two months and racked up more than 500 million downloads - at the same Apple event can't have hurt investor sentiment either.

Unsurprisingly there was good news too for DeNA stock holders as the Japanese mobile publisher, which is partnering with Nintendo on these mobile titles, saw it's shares up 21% at one point, eventually settling down to a rise of 9-10% on the day.
Super Mario Run will be released on iPhone later this year (with Android expected to follow some time after) and whilst the precise financial model for endless runner has not been outlined, it is understood that the game will be free to download but require a purchase to unlock the full experience.

Nintendo has also said it plans to release mobile games for its Animal Crossing and Fire Emblem franchises by March.