Chewie get us out of here! 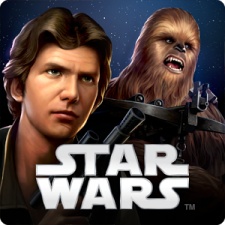 Like other MOBAs, the title will be free-to-play, real-time PvP. Players must choose between joining the Rebellion or enlisting with the Empire, and then build up their squads and character cards to take on and then crush their opponents.

The game will support single player, 1v1 and 2v2 multiplayer.

The game has been soft-launched in Australia, and will eventually rollout to other countries on both the iOS App Store and Google Play, though no release date for a worldwide release has been announced yet.

“We hope to bring the same level of excitement to the mobile arena that Star Wars has given its fans around the world. Sign-up for pre-registration today, and be notified when the game goes live as we kick-off a whole new adrenaline-fueled Star Wars adventure together.“

The company is currently gearing up for an IPO, and in September applied for preliminary approval to the Korea Exchange to launch its multi-billion-dollar initial public offering.