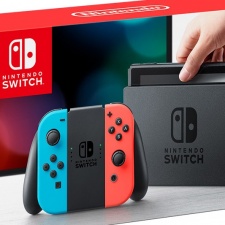 Nintendo's new Switch console has now launched around the world for £279/$299.

Online availability for the console in the UK is already limited. Retailers such as Amazon and GAME are completely out of stock, while Tesco and ShopTo still have limited quantities of the grey console available.

Initial impressions of the console have been mixed due to its relatively high price and some issues with controllers. Our sister site Pocket Gamer gave it a glowing 9/10 review, calling it a "promising first step into Nintendo's next generation."

The Switch is a hybrid of a traditional home console and a mobile gaming tablet. Given the decline of tablet gaming, it can be argued that the console has a good chance of being a huge success.

That said, predictions of its sales for the year are already relatively low. SuperData Research suggests that the console will sell 5 million units by the end of 2017, and Nintendo has only shipped out 2 million units to retailers.

Investors appear to be happy with the console's launch so far, however. Niko Partners analyst Daniel Ahmad noted that share prices in Nintendo have risen 4% since it launched.