Might & Magic Heroes: Era of Chaos expected to launch June 2017 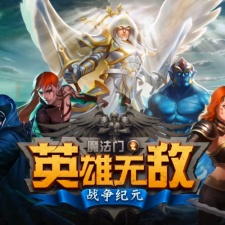 Ubisoft has partnered with publishing behemoth Tencent and mobile game developer Playcrab to bring its Might & Magic franchise to mobile in China.

The partnership has resulted in card-based strategy game Might & Magic Heroes: Era of Chaos. It is expected to launch in June 2017.

The game has largely been developed by Playcrab, though teams from Ubisoft Mobile and the Might & Magic brand have also contributed to the game.

"Playcrab was among the first studios we selected based on this strategy," said Aurélien Palasse, Head of Licensing and Publishing at Ubisoft Mobile China.

"First, they had an impressive track record of high quality and commercially successful mobile games. Then they really convinced us all by showing a genuine passion and enticing vision for the Might & Magic franchise."

Ubisoft is also looking to partner with other local publishers and developers in the future to grow its mobile presence in China. Palasse stated that "we have other exciting projects in the works with great partners".

The developer has already partnered with China's Ourpalm to release an MMO based on the Assassin's Creed franchise. It was being developed in partnership with Ubisoft's Montreal studio specifically for the China market.