Bangalore outfit will adapt the game for Indian audience 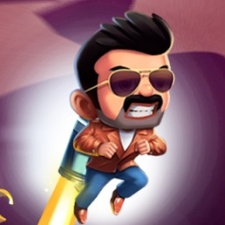 Jetpack Joyride has proven to be a huge success for Australian developer Halfbrick since its original launch in 2011, contributing to the company's haul of two million DAUs and one billion downloads across its portfolio.

This partnership will allow Mech Mocha, who recently raised $5 million in series A funding, the exclusive rights to culturalise elements of the original game to better appeal in the Indian market.

One example of the changes being introduced for the new market is that the all-American hero of the original Jetpack Joyride, Barry Steakfries, is now an Indian don called Barrykanth.

"We are giving it an Indian twist by culturalising the game and keeping in mind what Indians love and want to see in their games. We specialise in developing games for the Indian market and are confident that this game will be successful.

"We will announce the launch date soon,” she added.

The Indian mobile games market can be a complex one to navigate, with issues continuing around mobile internet infrastructure, credit card usage and a still-developing gaming culture in the country.

For Halfbrick, this partnership offers a way of penetrating a difficult market, and Mech Mocha is confidently predicting five million Indian downloads for the game in the first year of launch.

"We wanted to make a game that connects to more than 500 million future Indian gamers. I can’t wait to see the Indian version of Barry storming through the villain’s den."

A comparable partnership from the past would be the one between ZeptoLab and Nazara Games, which resulted in the latter launching a culutralised version of Cut the Rope in India.