Get your fishing rod and prepare to go to space 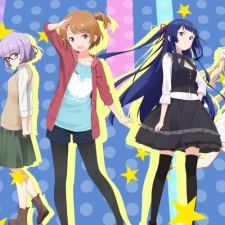 Sony ForwardWorks has opened pre-registration for its second game titled Sora to Umi no Aida with a launch in Japan due for October 2017.

The game is being developed by ForwardWorks in collaboration with director Oji Hiroi. Hiroi is known for creating the Sakura Wars series.

Sora to Umi no Aida (roughly translated, Between the Sea and Sky) appears to be a part visual novel, part Monster Strike-esque midcore game. It focuses on six young women who are training to become fisherwomen in space.

The game was first announced back in December 2016 along with the rest of ForwardWorks' upcoming catalogue. It appears to have been pushed up the studio's schedule – No Heroes Allowed! DASH! was originally due to be its second game.

ForwardWorks launched its first game, Everybody's Golf Mingol, earlier in 2017. A pre-registration campaign was also run for the game.

Sony ForwardWorks preparing to push its games beyond Japan in 2018