Switch on the go 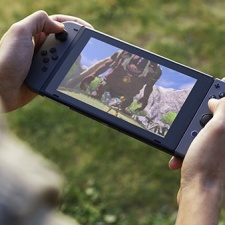 More Nintendo Switch owners are playing the console in handheld mode than they are in docked TV mode.

During the company’s financial results briefing, President Tatsumi Kimishima revealed that around 30% of players use the console in tabletop mode or as a handheld as their primary method of play.

Just under 20% primarily play games in the docked TV mode. Just over 50% regularly switch between the two modes.

These stats are based on play time for either docked or undocked modes exceeding 80% of gameplay time.

As far as the console’s main audience, Nintendo said purchases are primarily made by male consumers in the 20s and early 30s. There is also said to be good interested among consumers from the 10 to 19 age range.

As far as sales go, Nintendo appears confident that Switch sales could be on track to match early Wii figures. Though currently lower, the Switch did not launch during the holiday period, whereas the Wii did. Sales are still higher than the Wii U at this stage, however.

Nintendo admitted that sales could have been better still for the Switch had it been “better prepared from the start” and not suffered hardware shortages after demand exceeded expectations.

Overall Nintendo expects to sell 14 million units by the end of the fiscal year. Around seven million Switch consoles have been sold to date.