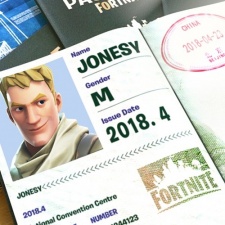 Epic’s hit PC and mobile game Fortnite is heading for China, the company has teased.

The developer tweeted a photo of a passport with the date of April 23rd 2018 stamped on the inside, suggesting it could launch today.

It’s not clear whether the PC or mobile versions will be released, or if both will launch at the same time. The latter may make sense if feasible given the cross-platform feature of the Unreal Engine 4-developed title.

The Battle Bus is taking off!

Though no details were provided, it’s likely the game will be published by Tencent given the close ties the two companies have. The Chinese publishing giant acquired a significant stake in the developer back in 2013.

While Fortnite was originally conceived as a base building PvE game, the introduction of a battle royale mode has seen the title become a cultural phenomenon.

According to mobile intelligence firm Sensor Tower, Fortnite mobile generated $25 million in worldwide revenue in its first month. Daily revenues are thought to have topped $1 million.