The adventure RPG game has already caught 2.5 million downloads on the Nintendo Switch 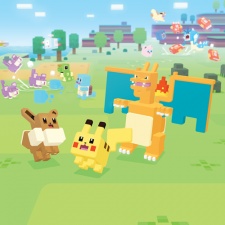 The adventure RPG title is available globally and can be downloaded through the iOS App Store and Google Play.

The game takes place on the squared-out Tumblecube Island and features the 151 original pokemon from Pokemon Red and Pokemon Blue.

Gameplay revolves around creating and herding a team of pokemon around the island, using touch controls to make them battle foes.

Players can also customise a base camp like in Gameboy Advance title Pokemon Ruby and decorate it with collectables to provide in-game benefits and attract other Pokemon.

*Inhales* I wanna be, the very best (like no cube ever was)

Pokemon Quest has already proven to be popular on the Nintendo Switch and has caught 2.5 million downloads since it launched in late May.

The latest instalment in the Pokemon franchise launched soon after it was announced at a press conference in Japan.

Also revealed at the conference were two other entries in the Pokemon franchise called Let’s Go Pikachu and Let’s Go Eevee.

Described as a remaster of Game Freak’s 1998 hit Pokémon Yellow, the pair also combine functionality with Niantic’s mobile hit Pokemon Go. They are set to launch on November 16th 2018.