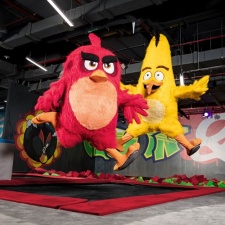 Rovio has teamed up with location-based entertainment company Trimoo to open an Angry Birds World amusement park in Qatar.

The entertainment park features rides and attractions such as the Trampoline Universe, which is a 1,300 square metre area full of gravity-defying trampolines.

Other features include is a 106 metre Own the Sky roller glider called No fowl play and an interactive learning centre called The Big Tree, where children can learn about music and science.

“Angry Birds World is our flagship experiential destination where millions of our passionate fans can immerse themselves in the wonderful world of Angry Birds,” said Rovio SVP of brand licensing Simo Hämäläinen.

“Our new world-class attraction based in the heart of Doha, Qatar is another clear demonstration of the global appeal of the Angry Birds brand.

“Rovio has its strongest licensing roadmap to date, which is being spearheaded with the theatrical release of The Angry Birds Movie 2 in September 2019. These are exciting times for Rovio. ”

An outdoor area is set to open at a later stage.

Want to learn more about the games industry in the Middle East? Check out our fully localised Middle East edition of PocketGamer.biz right here.