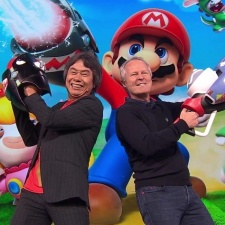 Nintendo will be driving forward with a fixed price model for its mobile games despite a lack of success so far.

That comes from developer Shigeru Miyamoto (Pictured main left) who, according to Bloomberg, went into depth on the topic at the Computer Entertainment Developers Conference.

According to Miyamoto, the games giant believes that if it delivers games at a reasonable price it will eventually reap the benefits.

"I can’t say that our fixed-cost model has really been a success," Miyamoto said about Super Mario Run.

"But we’re going to continue pushing it forward until it becomes entrenched. That way everyone can develop games in a comfortable environment.

“By focusing on bringing games to the widest range of people possible, we can continue boosting our mobile game business."

As previously reported, Miyamoto also delved into the development of Super Mario Run during his talk at CEDEC 2018.

Specifically, Miyamoto explained that he felt the final product was too hard, despite his push to make the game more challenging in production.

The introduction of the Remix 10 was made to remedy the situation.

The mode staggered shorter levels together to combine a total score and is how Miyamoto believed he "should have made it from the beginning."