Huawei wants to take on the Switch with a $1,000 phone 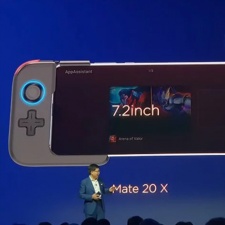 Huawei wants its new $1,000 gaming phone to compete with the Nintendo Switch.

Nintendo Life reports that the Chinese phone manufacturer has revealed a new gaming phone will hit store shelves on October 26th and is gunning for Nintendo’s hybrid.

At $700 more than the Switch, the Huawei Mate 20 X has a tough fight ahead of it. But Huawei has flaunted a number of statistics claiming its device is the superior handheld gaming tool.

Huawei directly called out the Switch as a competitor. The Mate 20 X features a 7.2-inch OLED outputting 1080p images, compared to the Switch’s 6.2-inch 720p screen.

The Mate 20 X also boasts a larger 5000mAh battery for up to 6.7 hours of play - double that of the Nintendo Switch’s approximately three-hour life.

Huawei’s device has stylus support, but only sports one physical controller attached to the left-hand side of the device. Touch screen input is bound to be a feature in most titles.

But Huawei has no presence in the games market, let alone compared to Nintendo’s embedded position in handheld gaming. While its calls the Mate 20 X "the best portable mobile gaming machine”, there is no word on what games or developers will headline the device’s launch.

That price point is a major intimidation point too, at almost double the price of home consoles and over triple the cost of a Switch.

Huawei will need to prove that such a high point of entry will result in an outstanding gaming experience.