Still a way off of Fire Emblem Heroes 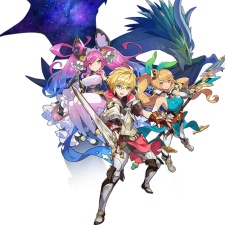 Nintendo’s Dragalia Lost has grossed more than $75 million globally on the App Store and Google Play, according to Sensor Tower.

Developed in collaboration with Cygames, the action role-playing game is a brand-new IP not based on an existing Nintendo licence.

Of two of Nintendo's other mobile titles, Animal Crossing: Pocket Camp has earned $70.8 million in gross revenue since November 2017 and Super Mario Run has brought in $68.6 million since December 2016. Dragalia Lost surpassed both these in just five months since releasing in September 2018.

68 per cent from Japan

Japan accounted for 68 per cent of Dragalia’s gross revenue, while the US came in at second with 18 per cent. In mobile games revenue for January, the title placed at 29th position for Japan and 120th in the US.

Despite bringing in $75 million, the title still underperformed from CyberAgent’s high expectations, resulting in the company revising its financial forecasts.

Nintendo’s highest grossing game to date via mobile is Fire Emblem Heroes, which has grossed more than $500 million worldwide since launching in February 2017.