Firm states that new 5G network will utilise its 34,000 5G base stations across the country 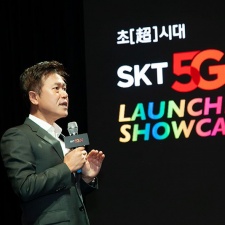 Revealed during SK’s press conference at its Seoul headquarters, the company detailed its new services along with a variety of different price plans.

Offerings in the package include around 8,000 different pieces of content across games, ultra-high definition, augmented reality and virtual reality. This includes a partnership with League of Legends Champions Korea to create VR and AR version of the game.

Alongside this, Hatch has teamed with the firm to exclusively provide a minimum of five games via streaming. Nexon will also begin to offer Kartrider VR.

Moving up, those who subscribe to more premium plans such as 5GX Prime and 5GX Platinum before the end of June will receive unlimited data without speed restrictions. These contracts are priced at ₩89,000 ($78.27) and ₩125,000 ($109.92) respectively.

Furthermore, the firm said that its new 5G network will utilise its 34,000 5G base stations across the country.

“The AR, VR and cloud games unveiled today only mark the beginning of the age of hyper-innovation brought by 5G,” said SK Telecom CEO Park Jung-ho

“SK Telecom will continue to introduce 5G-based innovative services to lead all areas of New ICT.

The network has been rolled out to 85 cities across the nation in predominantly concentrated areas and will expand its coverage to subways, national parks and festival sites in the second half of 2019.