MMORPG is now available in the App Store and Google Play 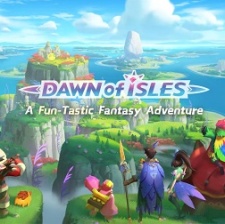 NetEase’s newest MMORPG is now available in the App Store and Google Play with an exciting Kumamon X Dawn of Isles crossover event.

NetEase Games’ new MMORPG Dawn of Isles is now available on the App Store and Google Play, and there’s a special crossover event with Japanese mascot Kumamon to promote the game.

In Dawn of Isles players adventure across dangerous islands all while building their own in a world full of fantasy and magic. It features a cell-shading animated style, and has traditional role-playing aspects such as character customisation and questing, but it also seeks to innovate in a few ways.

The pet system enables players to capture, train and evolve their companions, which they can also use to roam the world with.

The Dawn of Isles X Kumamon Crossover Event will last for one month once the game releases with Kumamon, the popular Japanese black bear-like mascot featuring a prominent role.

Kumamon, a black bear-like mascont, is one of the most famous mascots in Japan, The mascot was created in 2011 as a local campaign to draw tourists to the Kumamoto Prefecture after the Kyushu Shinkansen line opened. Since then it has become a popular mascot both at home and abroad and has brought the prefecture new popularity.

To bring Kumamon to Dawn of Isles, the game has customised several Kumamon crossover events such as Hide and Seek, Greedy Glutton, Banana Frenzy, and more. They will be open to players only during the crossover period.

Players can unlock and have access to all of them once they finish the special quests with Kumamon. There will also be Kumamon-themed emojis, balloons, gift-backs and plenty of other benefits ready for players to collect.