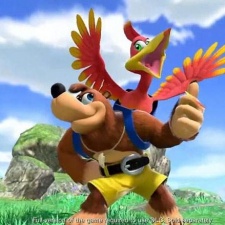 Nintendo is collaborating with Microsoft to bring Banjo-Kazooie to Super Smash Bros. Ultimate.

The new was unveiled during Nintendo’s E3 Direct. The duo’s reveal was humorously similar to the one that Nintendo pulled when King K. Rool was announced, as the Duck Hunt Dog made a silhouette of the bird and bear.

Banjo-Kazooie was created by Rare, with the company itself being owned by Microsoft since the early 2000s. However, the pair’s roots are cemented in Nintendo with the first two releases in the series landing on the N64.

Alongside Banjo, Hero from Dragon Quest XI was revealed as the third downloadable character.

Both characters will be available to download as part of the Smash Fighter Pass, with Hero arriving in the summer and Banjo-Kazooie in the autumn.

Nintendo "laughed their asses off" when Microsoft inquired about acquisition