Unnamed equipment comprises of a large ring and leg strap 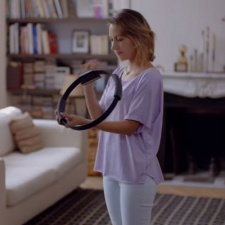 Nintendo has created a new piece of fitness equipment for the Switch.

In a video posted on YouTube, the Japanese firm teased a new odd-looking piece of gear.

There has been no mention of a name, or what titles it will be compatible with. However, more details are to be revealed on September 12th, 2019.

The video shows a group of friends using the fitness device. As the video goes on, it jumps to various cities worldwide such as Kyoto, Dallas, Paris, San Francisco, Rome and Madrid.

In each section of the video, one person uses the equipment - a large ring with one switch controller attached and a leg strap for the other joy-con. They perform physical activities such as yoga, running in place, and bicycle kicks and sit-ups.

Nintendo has a history of creating exercise and fitness titles. On the Wii, it released Wii Fit, which arrived with a board to perform physical activities.

The company also released a Zumba game for the Wii and most recently Fitness Boxing on Switch.