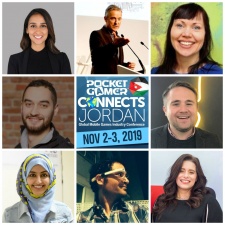 Pocket Gamer Connects lands in Jordan NEXT WEEK for the very first time and the international speaker lineup is set to help the show make an impressive debut on November 2nd and 3rd.

500 industry professionals will hear from 70 of the world’s leading authorities and local talent in the games industry and the Middle East and North African (MENA) region sharing their expert analysis, insight and thoughts.

They join the likes of Zynga, iDreamSky, Epic Games, Ubisoft, King and more - which you can find out about here, here and here.

The full schedule for Pocket Gamer Connects Jordan is also live, which you can check out here!

But without further ado, here are the latest speakers!

Not so long ago, we announced a collaboration with the International Mobile Gaming Awards (IMGA) for Pocket Gamer Connects Jordan, which sees their awards ceremony taking place on the first day of our conference, Saturday November 2nd.

We’re delighted to announce that IMGA’s Maarten Noyons also features in our speaker lineup on a panel discussing what it takes for a game developer to stand out in the MENA region. He’s joined by Gamejam’s Christian Calderon, Zynga’s Sonja Angesleva and Play 3arabi’s Ahmed Alsafar.

Calderon also hosts his own session looking at the growth in hypercasual and ad monetisation, while Angesleva gives her presentation on soft launch planning and risk management. In the meantime, Alsafar’s seminar reflects on the market by using data to understand what games work in the MENA region.

TPAY Mobile’s Sahar Salama and Unity’s Maxim de Wit co-host a session where TPAY Mobile reveals a new partnership that will provide huge opportunities for developers and mobile operators in the MENA region, reshaping the area in the games industry.

Salama also joins a panel with Yayy’s Ziad Talge addressing the issue of content in the MENA region being created for the region and in no way competing with companies from outside the region. They also look at motivational methods for developers from the MENA region to start focusing on creating content for the global market.

Explore the hot topics of 2019 and 2020 - automation, data quality and fraud prevention - in an unmissable keynote session from Adjust’s Riyad Khalil.

Explore the hot topics of 2019 and 2020 - automation, data quality and fraud prevention - in an unmissable keynote session from Adjust’s Riyad Khalil

And speaking of hot topics, Anomaly Games’ Jörg Reisig analyses how the climate crisis is handled by video games, looks at the history and current takes on climate change in the medium and ponders the question of how this topic is not as prominent in interactive media as in traditional media.

Snap Inc’s Sam Bevan demonstrates how developers can grow their games using real world examples of different businesses of all shapes and sizes currently working with the Snapchat platform. He also explains how to work across the continuously evolving and interconnected set of tools that share a common foundation for generating app installs, increasing revenue and exceeding customers’ expectations.

For more expert insight and analysis of the games industry, make a point of hearing Huawei’s Naji Robehmed and Ultimatum Games’ Shahid Ahmad speak at next week’s show.

ISSF’s Laith Al-Qasem and STV’s Sarah AlSaleh features on a panel which brings together investors to discuss the hottest topics facing the industry right now and give developers advice in regards to the best tactics when approaching investors to pitch your project. They also reveal some of the most common reasons why investors reject projects/teams.

Geewa’s Marek-Martin Matyska discusses game design for competitive gaming and how to translate ideas and mechanics into systems and math formulas that decrease live ops maintenance. He also appears on a panel with Tencent’s Vincent Gao and The Jordan Olympic Committee’s Nasser Majali to look at the ways in which developers an join the esports wave and bring the best experience to audiences.

One Superstar Session we’ll be sure to catch is Manu Somonte of SYBO Games as he shares his expert insight as a game maker and sets out the production process for Subway Surfers, while Hybrid Humans’ Fahkra AlMansouri talks about game design.

Danar Kayfi of Game Zanga leads a session which focuses on making games with Game Zanga; and Abdellah Alaoui Mdarhri of Shinko Games argues that there aren’t problems, only solutions...

Moving outside of the seminar halls, networking is the heartbeat of our shows. We pride ourselves on connecting you to the entire global games industry no matter where in the world, and you can do just that by taking advantage of the fringe events and networking opportunities that we are running alongside the show:

Be a part of something special next week and join us for the first-ever Pocket Gamer Connects Jordan! Book now!

Speak at the first ever Pocket Gamer Connects MENA this November