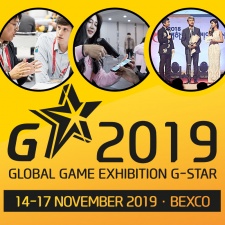 Less than a month from now, the whole games industry will be descending on South Korea. Why? Because G-STAR is one of the biggest events in the world. An annual consumer show and b2b conference rolled into one, it brings investors, publishers, game makers and gamers together in Busan.

The Asian market is one of the fastest-growing regions in the games business. And South Korea itself is home to some of the biggest names in games including the likes of Netmarble, Gamevil, NCSOFT, Smilegate, Bluehole, Supercell (the annual sponsor of G-STAR) and many more.

G-STAR also attracts companies from neighbouring countries like Japan and China, plus other rapidly growing regions like South East Asia and India, creating enormous opportunities for establishing contacts in a relaxed environment.

The conference and exhibition will welcome over 230,000 gamers walk the floors of the exhibition centre, along with plenty of other essential events to make this a productive trip for your business. PocketGamer.biz is a media partner and we will be helping run the Big Indie Pitch there. G-STAR is the season sponsor of all our global Big Indie Pitch sessions.

Over 30 indie studios have been selected to take part, and each studio will have their own space to showcase their latest games

To launch the conference, the Korea Game Award opens the show on the night before the expo halls open. This evening event features the Korea Game Awards, where the best talent in Korea are celebrated and honoured for their achievements. Last year caused quite a shock, because for the first time there were no online PC titles among the nominations, with all available slots filled by mobile games.

G-STAR welcomes all conference speakers, buyers, publishers, developers, and trade visitors both domestic and foreign. For an evening of mixing and mingling with the cream of the industry. A perfect way to start doing business in Korea in a relaxed atmosphere.

The main exhibition starts in style, with VIPs from the major attending companies, and leaders from the largest organizations, joining the team from G-STAR on stage. They’ll set the scene and welcome everybody to the event. With so much on display this year, there’s sure to be some big announcements...

After a hard day on the show floor, G-STAR invites all the trade visitors, exhibitors and buyers to a relaxing evening of cultural experiences. There, networking can continue over a few drinks. This is the perfect setting to wind down after the day and maybe close a few deals and make some lifelong friends.

Tickets for this event are selling fast so grab yours now.

Indie developers have their own showcase hall at this year’s G-STAR. Over 30 indie studios have been selected to take part, and each studio will have their own space to showcase their latest games to the world. The studios taking part come from all over the globe, and there will be a wide range of different game styles and genres on show. G-STAR will also be giving a reward to the most popular game.

As already noted above, this year will also host the final round of our Big Indie Pitch competitions where developers compete in a unique speed dating style format in front of a panel of expert judges. Each entrant has four minutes to demo their game and can get real feedback on their projects along with a chance to win editorial coverage in Pocket Gamer, bespoke Indie packages to promote and market your game across Steel Media’s portfolio of websites and events and also collect the prized BIP Baseball Bat.

If you are an investor looking for opportunities or a developer looking for funding, then this is the place to be. This quiet area is set aside from the hustle and bustle of the main exhibition, so you can chat freely and close deals on everything game-related, from education and video production to pitching and more.

Party On The Beach

G-STAR has a packed schedule of events, but there are also plenty of other things happening around the event. There will be many parties organized by game companies at Haeundae Beach area in addition to the official reception and G-STAR parties, so keep your eyes open for announcements. Plus there’s free wifi almost everywhere, so you’re never out of touch.

Online registration for G-STAR 2019 is only available until 31 October 2019 at the bargain price of $100 USD. After this time tickets can still be purchased on site but will cost $200 USD.

Grab your tickets now and ensure you don't miss out on the most significant games expo in Korea.

Organized by the Korea Association of Game Industry (K-GAMES) and co-organized by G-STAR Organizing Committee and Busan IT Industry Promotion Agency, the G-STAR conference is “the best gateway to the Asian games market”. Launched in 2005, this annual South Korean computer and video game trade and consumer show is the one-stop, easily-accessible gateway to Eastern markets. It takes place annually in Busan, South Korea. With one of the most active and developed gaming markets behind it, the biggest players in publishing, development and investment gather at G-STAR every year, to do business and set the industry trends. PocketGamer.biz will be there next month, so look out for us in the indie and b2b areas.