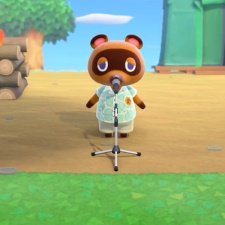 Animal Crossing: New Horizons' Direct has revealed new information on how the game will connect with Nintendo's existing suite of mobile apps.

For starters, a new section will be added to the Nintendo Online app. This allows players to chat to others via text or voice chat while online in several Nintendo games with online multiplayer.

On top of this regular feature, the new "NookLink" service will allow players to use QR codes of custom designs from 3DS titles New Leaf and Happy Home Designer, and import them into New Horizons. It also appears to offer friend settings for the game, and access to the in-game Passport, which has yet to be detailed.

For its mobile game Animal Crossing: Pocket Camp, a cross-promotional event is planned, with players able to earn items from New Horizons in the mobile entry, and vice versa. No date was offered for this event.

Pocket Camp has proved controversial since launch due to its use of free-to-play mechanics. That said, the game is Nintendo's second-highest grossing mobile game, so a hardcore fanbase definitely exists.

While the Animal Crossing: New Horizons Direct didn't cover everything, its wealth of new information has likely drowned out any naysayers griping about the series.