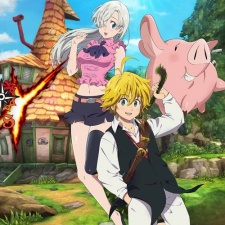 Netmarble has revealed that its mobile RPG adventure game The Seven Deadly Sins: Grand Cross has surpassed three million downloads in its first week of release.

Launched on March 3rd, 2020, the popular anime series transitioned to mobile devices and has made a big splash on entry. The Seven Deadly Sins: Grand Cross achieved first on the grossing chart on both France’s App Store and Google Play as well as placing second spot for installs.

In the US, the game earned second for the top 10 downloaded games on the App Store and Google Play and just squeezed onto the top grossing titles at 10th position on iOS.

Players in the UK helped the game to feature within the top five most downloaded apps on Google Play, alongside the top 20 across the App Store.

"We are excited to see such great success in the global market following Korea and Japan launches," said Netmarble co-CEO Seungwon Lee.

The Seven Deadly Sins: Grand Cross is available to download on the App Store and Google Play.

Netmarble recently teamed up with Marvel for a new mobile open-world RPG set in the comicbook universe.

Prior to this, Netmarble released its financial results for the fourth quarter of 2019 showing that its profits fell to $136 million in 2019 despite steady performance in North America.