Japanese developer reveals plans after months of rumours and speculation. 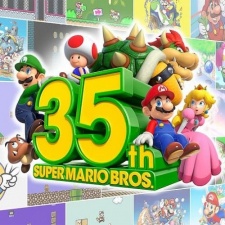 After months of speculations and rumours, Nintendo has finally announced its plans of how it will celebrate the 35th anniversary of the original Super Mario Bros.

The Japanese firm revealed a host of details during a celebratory anniversary Nintendo Direct, with all games and products shown being made available up until Spring 2021.

Kicking off proceedings, Nintendo announced that it will release a Game & Watch system that will play Super Mario Bros. in full, alongside Super Mario Bros. The Lost Levels and an updated version of Game & Watch Ball starring the plumber. The device will include a plus control pad, function as a clock and will feature 35 bonus add-ons for fans to discover.

Following this, it was confirmed that Super Mario 3D World will finally be ported to the Nintendo Switch. The platformer has been requested by fans for a number of years, after making its debut on the Wii U back in 2013. The Switch version will feature a new section titled "Bowser's Fury" and shows Cat Mario on a dark island while lightning and thunder looms. A Cat Mario and Cat Peach amiibo will be available for purchase too.

Unexpectedly, Mario has now turned his attention to the genre of battle royale. A new online version of Super Mario Bros. will see players face off against 34 other competitors until the final one is left standing. The aim is to complete the level as fast as you can, however enemies that are defeated can be sent off to other player's screens and vice versa - similar to Tetris 99.

Super Mario Bros. 35 is exclusive Nintendo Switch Online and can be played digitally only from October 1st, 2020 until March 31st, 2021.

Just as surprising was the confirmed existence of Mario Kart Live: Home Circuit, a Switch racing game that utilises AR and real RC cars. From the trailer shown, the game looks like a traditional Mario Kart but with the player's living room being substituted as the track.

Mario Kart Live: Home Circuit will be available to pick up from October 16th, 2020.

The latter of which will see Mario and Donkey Kong Jr. from the original Super Mario Kart join the game from September 8th as part of the anniversary event.

Additionally, a limited-edition pin set can be claimed for those who complete certain missions via the Nintendo Website. These events will run all way through until March 2021.

Nintendo next revealed that Super Mario All-Stars would be making its way to the Switch, 27 years after launching for the SNES. The collection will feature the original Super Mario Bros. trilogy and Super Mario Bros. The Lost Levels, with all receiving upgraded audio from the Famicom and NES version.

Super Mario All-Stars is available to download from the SNES online collection as of today.

Each game has been upgraded with higher resolution, 16:9 screen ratio, a music player mode, and is compatible with two Joy Con controllers. For some unknown reason, the game will only be available for six months before Nintendo removes it from sale at the end of March.

Nintendo experienced strong year-on-year growth during its latest financial quarter, generating $3.4 billion in net sales. No doubt these announcements will factor in heavily to its next financials briefing.