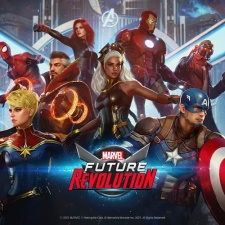 The South Korean developer held a livestream on June 30th, where details of the upcoming mobile game were disclosed - including that pre-registration is now open for iOS and Android.

Marvel Future Revolution's narrative begins with a multi-dimensional crisis known as "Convergence" that sees a mysterious cosmic force break down the barriers between realities and causes multiple alternate Earths to collide with one another. The Vision sacrifices himself to stop this using phasing powers to combined the planets into one primary Earth.

As a result, and in tandem with technology from Project Pegasus, the Vision becomes the core of a "Convergence Engine" to hold everything in place. This measure is only temporary and it's up to the Avengers and friends to save reality and defend the planets from numerous villains.

"I will tell you it's a stunning game - it is beautiful. It's super fun and easy to pick up," said Marvel New Media vice president and creative executive Ryan Penagos during the livestream.

"It explores a history of Marvel stories that we've never seen before and reveals an amazing new future for Marvel mobile games", he added, noting that the collaboration has been years in the making.

Anyone interested in pre-registering for Marvel Future Revolution can do so here. You can watch the full stream below:

Netmarble's Ni No Kuni: Cross Worlds recently surpassed $100 million in player spending within its first 11 days of being live.

Meanwhile, mobile collectables app VeVe has signed up Marvel for a series of NFTs releases.