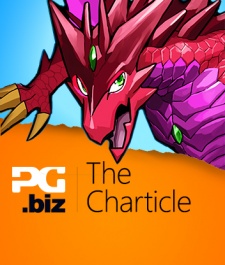 Japanese developer GungHo Online has become a gaming superpower thanks to the unprecedented success of its mobile puzzler/RPG, Puzzle & Dragons.

The firm's flagship title, released first in Japan, blew away all of its competitors, successfully reaching a landmark 20 million users towards the end of 2013, while attracting an average of 1 million new players a month.

It's also vying with Clash of Clans and Candy Crush Saga to be the first $1 billion mobile game.

Of course, momentum of that magnitude couldn't be sustained forever. Eventually the game began to lose some steam in Japan at least in terms of player  numbers - though it remains miles ahead of the competition and locked into the top grossing position on the Japanese App Store.

GungHo had planned for this eventuality by unleashing Puzzle & Dragons into the western market, rolling out the game across the US, and Europe, on iOS and Android.

The timing, it seemed, had been perfect.

Just as sales began to dip in Japan, the firm revealed that Puzzle & Dragons had passed 2 million downloads in North America, proving that Asian games can compete in the western market.

But, just how well has the title been grossing in the west, and, nearly two years since it launched, is its dominance in Japan starting to slip away?

As always, the charts reveal all.

Despite being a slow starter in the US, Puzzle & Dragons gradually secured its place in the top 100 in the top grossing chart for Google Play.

Consistency has been the key word ever since, with the game frequently breaking into the top 25, but only very rarely tickling the top 10.

The title's performance in the US top grossing chart for iPhone tells a similar story.

Performance is noticeably more erratic on iPhone, with the game breaking into the top 10 on a more regular basis than its Android counterpart, despite failing to firmly nail down a place within the top 50.

In what GungHo might want to label a 'cause for concern', Puzzle & Dragons simply hasn't taken flight in Europe.

The game has made almost no impact in France, Germany, Italy, and Spain, continuously struggling for consistency in those countries, and rarely troubling the top 200 in the iPhone grossing charts.

The title has found slightly firmer footing in the UK though, and after embedding itself within the top 200, it frequently breaks into the top 100.

However, with the game peaking in Europe at #31 in the Spanish iPhone chart, perhaps its time for the firm to reassess its European battle plan.

Over in Japan, it's evident that Puzzle & Dragons' reign at the top of the iPhone grossing chart wont be coming to an end anytime soon.

The game has been rooted at #1 for over a year now, and, since being released in early 2012, it has remarkably only ever dropped out of the top 2 on four occasions.

Charticle Special: What Flappy Bird's success tells us about social openness and geopolitics