How to deal with word fragmentation 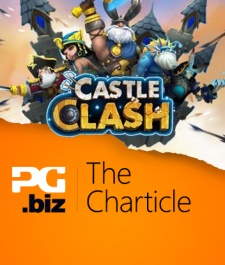 Recently we took a look at how Aeria Games has released and operated separate French, German and Russian versions of its mobile card-collection games Immortalis.

Yet there is another outfit which has taken the approach to an extreme - a very successful extreme.

Singapore-headquartered publisher IGG (I Got Games) has released 16 versions across 14 different languages of its Clash of Clans-inspired city and army-building strategy game Castle Clash.

For Amazon and iOS, it's taken a conventional approach. There's been one version for the Amazon Appstore and two for iOS - a main version and a Chinese language version.

A rich vein of investigation for a Charticle Super Special, then...

Starting with the US

To start off with, we can make a simple comparison in terms of the game's US performance.

Surprisingly for a strategy game, Castle Clash has performed better on the small screen iPhone than iPad.

Neither format has seen a brilliant download performance, though, with the game peaking quickly after its October 2013 launch and then steadily falling down the top 200 charts for both iPhone and iPad (a couple of big spikes not withstanding).

Equally surprising is Castle Clash's grossing performance. This is much better than its downloads numbers would suggest, although monetisation-wise it doesn't do anything obviously different to most other strategy games - one hard currency, two soft currencies, builders, shields etc.

Grossing performance is good for iPad, where the game has steadily moved into the top 100, and stronger for iPhone, despite this being the more competitive market.

We can also see a similar format performance differential if we look at the game's top grossing charts for France and Germany; the iPhone has been the main driver of success, although iPad performance is catching up over time.

Taking a quick look at Amazon - for the sake of completeness - we can see that Castle Clash has performed well, with a big pick up in downloads over recent days.

In terms of the US and EU5, the only weak spots have been Italy and Spain - hardly hotspots in terms of Amazon hardware.

This analysis made, we have to delve into Castle Clash's performance on Google Play, which is the most important format for the game.

Looking at the top grossing charts for the US and EU5 - the UK, France, Germany, Italy and Spain - it's the English language countries that dominate performance in terms of the main release.

Italy has been a strong market, while it's taken time for Germany, France and Spain to build up momentum, but this is to be expected as these markets are effectively being cannabalised by their own language versions.

Yet, when we look at the versions of the game released for the four main European languages, we're also looking at their geographical global spread.

For example, the Spanish version has been #5 in Chile and Argentina, #8 in Mexico and #10 in Spain in terms of grossing performance.

Even those versions which are targeted at once country, have provide to be successful, as demonstrated by the top grossing charts for Turkey and Italy.

All this shows that if you have a game with universal appeal, spending the time to support local markets can really make a difference to your success.

Castle Clash would not have been this successful if IGG had only released a single version, even if that version contained support for multiple languages.

However, there is one region of the world while the approach has proved more patchy.

While the Thai version has been successful as has the Indonesian version, and Chinese version in Taiwan and Hong Kong, the key Google Play markets of South Korea and Japan have been much harder in which to sustain grossing success.

This is because they are extremely competitive and currently dominated by the Kakao and LINE platforms, which Castle Clash has not yet supported.

Significantly, though, IGG has signed a deal to release a version of the game for Tencent's crucial WeChat platform in China; something that will likely boost the game to further success over the coming months.